Mixed reaction to government's plan to deal with unemployed graduates 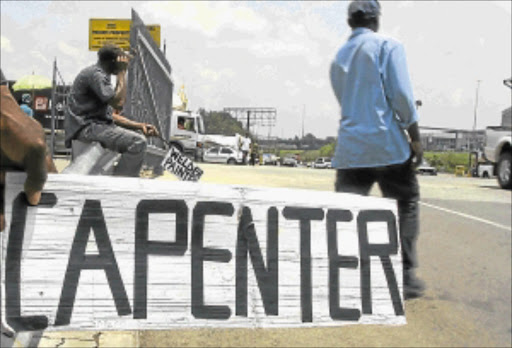 Unemployed artisans tout their trade on the roadside for piece jobs such as painting, plumbing and carpentry.
Image: BUSISIWE MBATHA

A new government recruitment scheme was on Wednesday met with mixed reactions from the graduates who are supposed to benefit from it.

The Public Service Graduate Recruitment Scheme‚ which was launched by public service and administration minister Ayanda Dlodlo at the University of Johannesburg on Wednesday‚ is the government’s response to resolving the problem of unemployed graduates.

But not everyone was convinced following Dlodlo’s address – with some saying they were left with more questions than answers.

Ayanda Madondo‚ an intern at the Department of Infrastructure‚ said she was not convinced the scheme would improve graduates' chances of getting full-time employment.

“It's one of those things that the government introduces. [It] sounds good on paper but not really sustainable because it’s all good and well to have internships over one to two years‚ but what happens when these come to an end because we are still not unemployable. Job vacancies want five years of work experience‚” she said.

Phamela Dunjwa‚ a human resources graduate at the university‚ said: “There is way too much corruption in the government sectors. One can only hope that this programme materialises. Graduate unemployment is a serious issue confronting mostly young black graduates‚” she said.

Dunjwa also raised concerns over the actual details of how the scheme would be implemented.

“I wish the minister stayed for the question and answer session‚ to answer and provide clarity on how the scheme is different from ones that already exist‚” she said.

Dlodlo left promptly after giving her address and did not take questions from the audience. She‚ however‚ committed to availing the information about the scheme online so it can be accessed by as many graduates as possible.

Dlodlo told the audience that the scheme was a response to curbing the high levels of graduate unemployment in South Africa.

But some welcomed the launch.

Lucky Magagula‚ also an intern‚ said the launch was informative and provided good pointers to graduates seeking employment in the government sector.

“I was left motivated and I will go and share the information to my friends in the township‚” Magagula said.

In May 2018‚ Statistics South Africa released the quarterly labour force survey‚ which showed that unemployment rate was 26.7% - which has been relatively stable at this level since the end of 2017.

UJ Vice-Chancellor Prof Tshilidzi Marwala expressed gratitude for the initiative and said that he fully supported it.