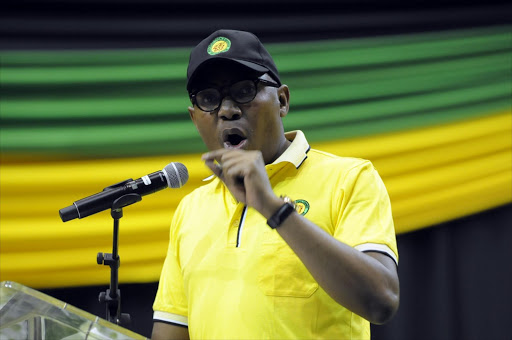 ANC MP and convicted woman beater Mduduzi Manana must also step down from the party's national executive committee (NEC) after his resignation from parliament.

This is according to #NotInMyName national general secretary Themba Masango, who has been at the forefront of holding Manana to account for his violence against women.

Manana yesterday announced that he had officially resigned from parliament with immediate effect.

Masango welcomed his resignation. "It's a step in the right direction but he still needs to be recalled from the NEC. The ruling party will be able to go into an elective year and campaign without a convicted woman beater in their ranks."

The ANC on Wednesday applauded former Higher Education minister Mduduzi Manana for resigning from parliament‚ saying this showed he was remorseful.
News
4 years ago

Manana, 34, has been marred by controversy since August after he beat up a woman at a restaurant in Fourways, Johannesburg, after an argument. Subsequent to the assault, Manana was forced to step down as deputy minister of higher education.

In May, he allegedly tried to push his domestic worker down the stairs at his home.

The National Prosecuting Authority has since decided against prosecuting Manana on the latest assault allegations, citing no prospects of success in court.

Masango said: "He was supposed to face the [parliamentary] ethics committee this week but he jumped ship before he could be embarrassed."

In a statement through the Mduduzi Manana Foundation, Manana said he has taken this step to focus on "renewed energies" ahead of the 2019 general elections. "I have decided to voluntarily withdraw my membership from the National Assembly after almost 10 years of active participation in parliamentary politics.

"Though there has been mounting pressure for me to step down as a member of parliament, I felt that this would have been a premature step as the matter was still with law enforcement agencies."

Manana admitted sexual and gender-based violence was "very serious", as evidenced by the reaction following his previous case of assault. He was ordered to pay R100 000, with 500 hours of community service.

Former deputy higher education and training minister Mduduzi Manana - who pleaded guilty to a nightclub assault - has resigned as a member of ...
News
4 years ago
Next Article