Eight arrested after a violent protests in Limpopo's Westenburg municipality 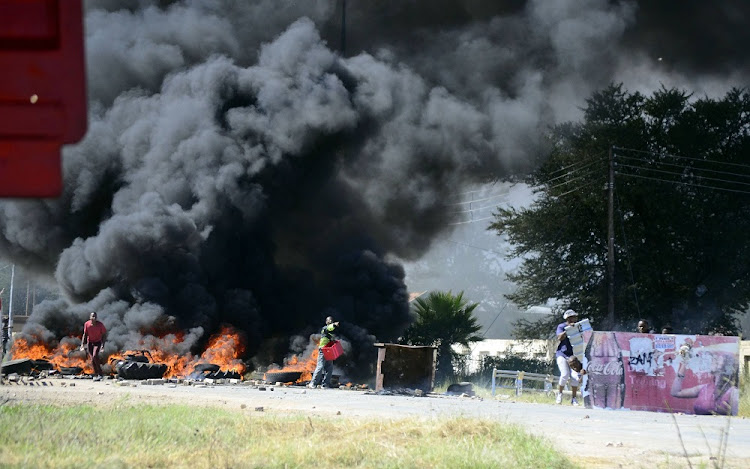 At least eight people have been arrested in connection with the violent protests that erupted at Westenburg near Polokwane, on Tuesday.

Those arrested were charged with assault on police, malicious damage to property and contravention of the National Road Traffic Act and the Gatherings Act. They were arrested during a skirmish with the police. Community members went on rampage, burning tyres and using debris to block public roads linking Polokwane and surrounding areas. Police had to use rubber bullets to disperse the rowdy protesters.

Brigadier Motlafela Mojapelo said a police officer was injured when stones were thrown at the police. He said members of the Public Order Unit were deployed to the area to normalise the situation.

“We had to open additional cases of malicious damage to property after two police cars were torched,” said Mojapelo.

He said those arrested were between the ages of 29 and 56 years.

Mojapelo said the protesters had managed to cut a fence at the police station and threw flammable substances, setting alight a police van and a marked truck, before fleeing.

“The arrested suspects will appear in the Polokwane Magistrate's Court soon. We also appeal to anyone who might have information that can lead to the apprehension of other culprits to call the Crime Stop number: 0860010111, or contact the nearest police station,” he said.

He added that the provincial police commissioner Lieutenant-General Nneke Ledwaba had condemned, in the strongest possible terms, the violent nature of the protests by the community of Westenburg.

A resident who spoke on condition of anonymity for fear of victimisation said the protests were sparked by huge municipal bills, lack of jobs and failure by the Polokwane municipality to provide them with RDP houses.

“We will continue with the protests until the municipality adheres to our demands,” he said.

He said they were also demanding the reconnection of water and electricity supplies for those who had been disconnected due to nonpayment.

“We have indigent families who cannot afford the huge bills. We demand a stop to this nonsense,” he said.

Municipal spokesman Tshediso Mothapo said they had reached an agreement with community leaders to resolve the impasse.

“The whole community is requested to come to the meeting on Thursday to listen to how their problems would be resolved as we endeavour to put a stop to the protests,” Mothapo said.

He added that they regretted the violence that had erupted but were leaving everything in the hands of the police “to deal with elements of criminality.”