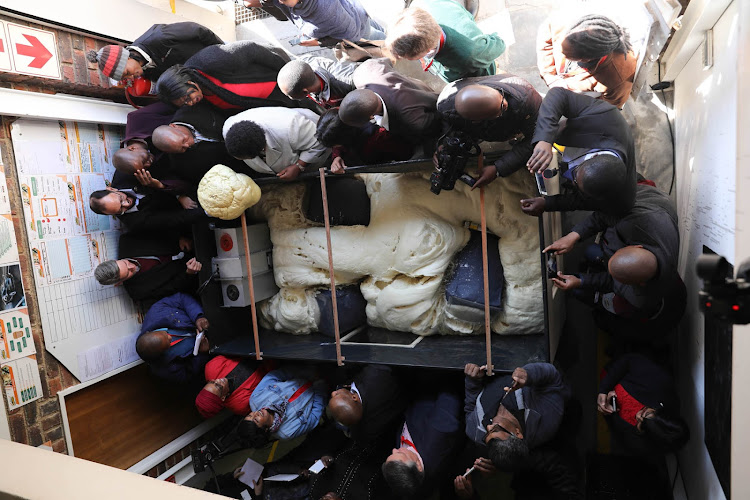 A demonstration of new foam technology that can assist in the fight against cash in transit heists.
Image: Simphiwe Nkwali

A technological battle to fight back against brazen cash-in-transit robbers has begun.

But while advances are made in safety and security mechanisms to protect millions of rand in cash transported across South Africa daily‚ there is little‚ if any‚ legislation setting minimum standards for technology to be installed in vehicles or to compel cash-in-transit companies to use the technology.

This was the message delivered at a panel discussion on potential solutions to cash heists‚ held outside Johannesburg on Tuesday.

In 2017‚ according to those on the panel discussion‚ R165-billion was transported by cash-in-transit companies in across South Africa. Of that‚ R465-million was stolen in just 10 heists‚ said panellists.

The discussion‚ which involved the Gauteng government‚ police‚ Interpol and cash-in-transit security experts‚ saw the demonstration of technology to protect money transported by road and being delivered to and collected from shops.

For such technology to be deployed it must be approved by the Reserve Bank as it can potentially destroy the money being transported.

A new Polyurethane Dispensing Unit was demonstrated on Tuesday July 24 2018, at a media briefing in Kyalami. PUDU is a new technology designed to help cash-in-transit (CIT) companies protect the money that they transport, and reduce the risk of heists. Subscribe to TimesLIVE here: https://www.youtube.com/user/TimesLive

The technology demonstrated included the latest advancements in ink dye and foam cement systems‚ which either make the money unusable or cash vans impenetrable.

"With over 170 cash-in-transit vans attacked on the roads since January‚ now more than ever we need everyone on board to combat these attacks‚" said AllCash CEO Graeme King.

AllCash has advanced a cash van foam defence system‚ which was developed by the Centre for Scientific and Industrial Research‚ and an ink dye system which destroys money in hand carried cash boxes should they be stolen from guards.

The foam system is activated inside a van's vault the moment a cash-in-transit vehicle is either rammed off the road‚ shot at or hit by a bomb blast.

King said the problems were that technology‚ which was being developed at a rapid rate by several companies in South Africa‚ was not being widely used by cash-in-transit companies.

"Pressure needs to be brought to bear on these companies. It is iniquitous that companies‚ which are responsible for moving high value assets such as cash‚ are not being compelled by government to deploy technology‚ especially given the dangers that surround the transportation of cash."

He said while technology was currently being improved‚ companies were cutting corners when it came to using this technology.

"The technology systems all have the necessary approvals of the Reserve Bank. They do the job and can make a big difference to this and other cash crimes."

He said there was technology that could thwart cash van bombers by protecting the money within milliseconds of a blast.

"Companies need to realise that it's imperative that they start to deploy this technology to both save lives and protect assets."

"In just 10 heists‚ R465-million was stolen with only R33-million recovered. This points to how much money these crime gangs are stealing‚ and how vital technology is in the fight against these crimes‚ especially when it comes to minimising deaths‚ injuries and losses."

He said the point of technology was that it placed companies and police in a proactive mode instead of being constantly reactive.

"Pressure must be brought onto cash-in-transit companies to implement technology to protect cash and as a step to prevent these heists.

"Technology also needs to be used to identify those behind these attacks if the war against heists is to be decisively dealt with‚ with cyber-security companies‚ cellphone firms and police agencies needing to work together on the technology front."

Crime researcher Dr Chris de Kock said of the demonstrations that such technology was not new.

"Some of what we are seeing has been around for 10 years. It needs to be asked as to why so many companies are not adopting these and other security strategies."

Gauteng's Community Safety MEC‚ Sizakele Nkosi-Malobane‚ said‚ with the province having the highest number of heists in the country‚ they had engaged with cash-in-transit companies to develop strategies to help reduce the scourge.