Mandela's voice of freedom rings out again in Cape Town 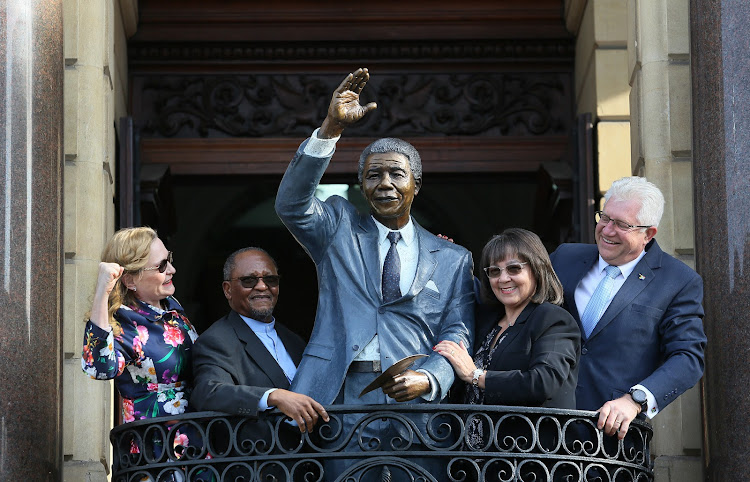 In a moment that was both eerie and nostalgic‚ Nelson Mandela spoke from the balcony of the City Hall in Cape Town on Tuesday.

Unlike the moment this first happened — on February 11‚ 1990‚ the day Mandela was finally freed after 27 years in incarceration — his voice was a recording‚ and the tall figure looking down on the crowd below was a bronze statue that had just been unveiled.

Madiba’s spirit was reignited by Archbishop Emeritus Desmond Tutu‚ who told those gathered for the unveiling: “To me his greatest triumph was restoring our pride and our self-belief.”

And‚ he added‚ even though post-apartheid South Africa had almost “careened off a cliff” lately‚ the healing and togetherness must continue.

Africa Melane‚ who hosted the unveiling‚ recalled how in 1990 he saw “this dapper man who was a lot taller than I thought he would be” stepping out of a car clutching the hand of his wife‚ Winnie Mandela.

“He brought some desperately needed change to South Africa‚” said Melane‚ adding that Mandela “eventually appeared on the balcony of this magnificent building”.

The statue‚ he said‚ would be a reminder of Madiba’s legacy for generations to come.

Professor Njabulo Ndebele‚ chairman of the Nelson Mandela Foundation‚ said Tuesday’s event was not simply the unveiling of a statue but also the unveiling of a legacy of “someone who is no longer with us” as well as an embodiment of the “future we envisage” for South Africa.

Cape Town Mayor Patricia de Lille first paid tribute to Tutu‚ recalling how he had the amazing ability to just “calm everybody down” during political meetings and protests in the past.

Of Mandela‚ she said‚ “he ushered in an era of dignity and rights”.

She also announced that in October another project would be unfolding at the City Hall which would see other Struggle heroes also immortalised there‚ because Mandela “never wanted to be honoured and recognised alone” and always acknowledged the role played by other comrades.

Steve Biko‚ Robert Sobukwe‚ Helen Suzman and Walter Sisulu are some of the individuals whose contribution to the Struggle for freedom will be honoured at the City Hall.

Western Cape Premier Helen Zille shared her personal story of arriving at the Grand Parade early in the morning of the day Mandela walked to freedom. She found her spot and sat there on her camping chair‚ later gasping with delight when he appeared.

“We had not seen what he looked like‚” she recalled‚ “and at first‚ before he spoke‚ the crowd just froze.”

She also pointed out that the new statue has him holding a pair of glasses‚ a detail which speaks of his humanity. She said his eyes were straining that day‚ and she thought it was from the effect of mining at the lime quarry on Robben Island. Later‚ she realised he had lost his glasses and was holding Winnie’s as a back-up pair.

She described the speech from 1990 as “an epoch-changing moment”.

But it’s not all memory‚ legacy and tribute. MEC for economic opportunities Alan Winde said the new statue was a culmination of a vision for tourism that made SA synonymous with two major assets: The Cradle of Humankind and the spirit of Madiba.

“Tour companies will flock here to see the statue‚” he said‚ “and one day you will see somebody selling Madiba’s favourite chicken curry on the Grand Parade.”