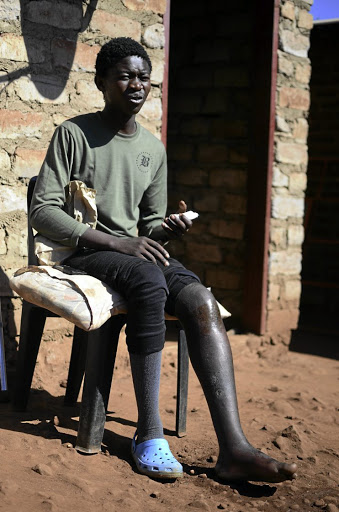 Akanyang Madube injured his left leg when a tractor wheel fell on him while working at a farm in Zeerust.
Image: Tiro Ramatlhatse

A North West farmworker faces the prospects of losing his leg after a heavy tractor tyre fell on him while at work last month.

Akanyang Madube, 20, from Mokgola village outside Zeerust has been in pain from two fractures in his left leg.

His employer drove him to the Mahikeng Provincial Hospital, 100km away, and allegedly dumped him there without paying the R40 admission fee. His injured leg was fitted into a plaster cast, which was removed on Tuesday.

He was discharged with the instruction to visit the hospital three times a week for further treatment, check-up and dressing of the wounds.

Though this further treatment will be handled at the local hospital in Zeerust, Madube said his family could not afford transport costs to take him there.

"My leg does not look good. I fear the injuries could become worse and I end up losing it if I cannot get to the hospital for treatment" he said.

Madube, who worked at Magfontein cattle farm outside Zeerust, said he got injured when his employer asked him and two other workers to change the tractor tyre.

He said the farm owner, Daniel Hlongwane, started shouting at them causing two of his colleagues to panic and dropped the tyre.

"It fell on me, and because it was heavy I screamed for help but no one came as they were scared [of the farmer]."

Farmworker fighting for her life after trailer overturns

A farmworker is fighting for her life in a Durban hospital after she was crushed by an overturned trailer in Tongaat on Friday.
News
3 years ago

He said Hlongwane later ordered other workers to remove the tyre before rushing him to hospital. He said he dropped out of school to look for work as his parents were not working. He added Hlongwane ignored his pleas for help towards his medical bills.

He also sought help from the department of labour but officials demanded to be given an address to the farm which Madube said he didn't know.

Hlongwane threatened Sowetan with legal action when approached for comment. He later admitted that Madube worked for him and got injured on his farm.

He said he was only willing to help Madube if he told his parents not to intervene, saying Madube's parents wanted to milk him dry.

"I will only help that boy if his stupid parents stop interfering, I am willing to help him not them," he said.

"His father is fighting me. I will never go there," he said.

"I sold my cow and TV because I have to take this boy to the hospital and buy him crutches and medication," Brian Madube said about follow-up trips to Mahikeng.

"I have nothing left, I am scared that his leg will rot until it gets amputated," he said.

Madube's mother, Lenah, said she feared Hlongwane as he had threatened them.

Labour department's Botsang Huma said she would need to contact Madube first to get information.