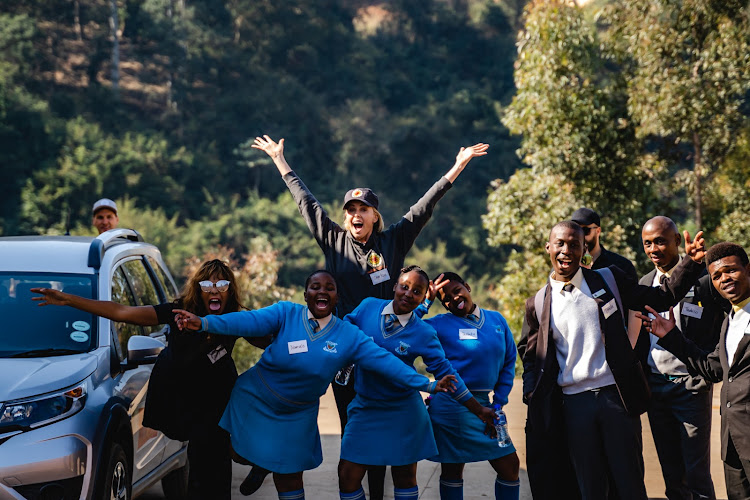 Oscar-winning actress Charlize Theron listened to dozens of pupils in the township of Sweetwaters outside Pietermaritzburg on Thursday about life in South Africa.

The South African Hollywood star sat down with teenagers from Phayiphini‚ Laduma and Mashaka high schools to discuss the social issues they face‚ including rape and substance abuse.

Theron was visiting the beneficiaries of Dlalanathi (meaning ‘play with us’ in isiZulu)‚ one of nine partners supported by the Charlize Theron Africa Outreach Project (CTAOP). Theron’s organisation was founded in 2007 and is aimed primarily at fighting HIV in sub-Saharan Africa. It has various programme partners across South Africa and Rwanda.

Based in Pietermaritzburg‚ Dlalanathi is a non-profit organisation that runs Youth In Action‚ a programme that empowers teenagers in surrounding communities to become actively involved in ensuring a better future for themselves‚ their peers and their communities.

“Charlize was incredibly affirming to the kids and present‚” said Dlalanathi’s operations director Robyn Hemmens. “You could feel that she had raw concern for the kids.”

Theron was earlier spotted at the Nelson Mandela lecture in Johannesburg on Wednesday‚ where former US president Barack Obama was the guest speaker.

Also present at the lecture was Canadian internet sensation Lilly Singh‚ who visited another of Theron’s programme partners Choma‚ an innovative magazine for cellphones aimed at girls and young women throughout South Africa. In a video Singh uploaded to her popular YouTube page on Thursday‚ she can be seen dancing and interacting with some of the teenagers from Choma.

On Friday Theron was spotted on a commercial flight to East London. She is believed to have been en route to King William’s Town to visit another of her project partners.