'Mandela never sold out on anything,' says Zuma and Ramaphosa 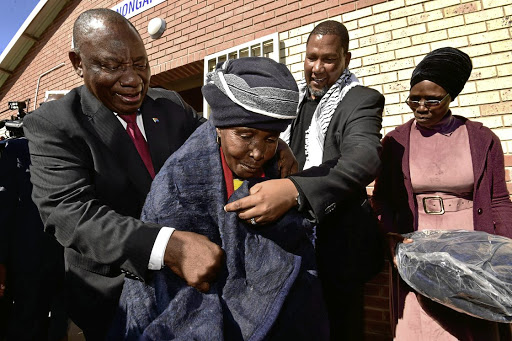 President Cyril Ramaphosa and Chief Mandla Zwelivelile Mandela hand over blankets to the elderly to mark the opening of the clinic to the public at Mvezo village, Eastern Cape.
Image: Elmond Jiyane/ GCIS

President Cyril Ramaphosa and his predecessor Jacob Zuma used yesterday's Nelson Mandela centenary celebrations to tell the rest of the world that the iconic statesman never sold out anyone or anything.

Instead, they argued that he paved the way by bringing political freedom.

"He never had it in him to sell [out] anything," said Ramaphosa. "What he created was a platform to continue with the struggle. He enabled the future."

Zuma insisted that Madiba had fought for the country, made sacrifices and became the longest-serving prisoner.

Ndaba Mandela has come out fighting for his grandfather’s legacy.
News
4 years ago

He said people should instead blame themselves for failing to take South Africa forward using the political freedom Mandela fought for.

"If we failed to use it to bring economic freedom and security, let us not blame Madiba. Let us blame ourselves," the former president emphasised.

Ramaphosa said Mandela belonged to a remarkable
generation who rose up against injustices and played a pivotal role in establishing the ANC Youth League which strengthened the ANC.

He said Madiba never saw himself as the wisest man in the country and was always open to sound advice.

But he warned Mandela would have been concerned by the re-emergence of racism in South Africa and on the African continent.

"There is no place for ethnic chauvinism in this place of Nelson Mandela." Ramaphosa said, adding that Madiba would want those present to root out sexism to enable women to play their role in society.

"His whole life was driven by principle not slogans or words," he said.

Mandela's eldest grandson and chief of Mvezo village, Mandla Mandela, said Madiba would be pleased that people had gathered not only to celebrate him but also another stalwart in Albertina Sisulu.