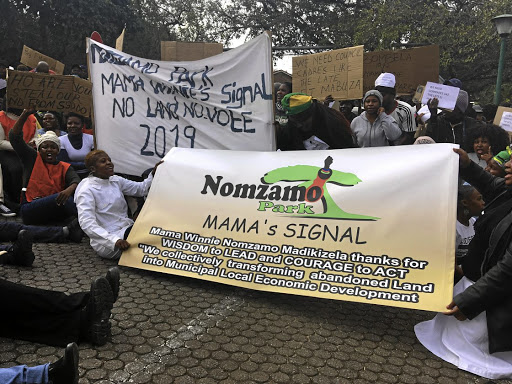 Marchers from Nomzamo Park, outside Mbombela in Mpumalanga, are demanding titles deeds of the land they grabbed from the Mbombela local municipality.
Image: Mandla Khoza

Residents in Mpumalanga have embarked on a series of land grabs, claiming to have received "a signal" to invade municipal land.

For the past three weeks, residents in areas around Mbombela have been illegally occupying pieces of vacant land owned by the municipality, saying they were showing the government how it should distribute the land.

This, locals said, was also in response to "a signal they received from Mama" - a reference to late Struggle stalwart Winnie Madikizela-Mandela.

Residents told Sowetan they had finally received a signal that EFF leader Julius Malema spoke of at Madikizela-Mandela's funeral.

That land is suddenly the flavour of the moment suggests that there might be an element of political opportunism, as opposed to an engrained ...
Opinion
3 years ago

"We have finally found the signal. This is our land as young people. We want to settle here as our parents were given small stands by the apartheid government when they moved them from Nelspruit to KaNyamazane over 40 years ago," said Sylvester Hlatshwayo. "This land belongs to the municipality and the municipality is ours. Actually, it's us, the municipality. We are taking it. We are tired of staying in our parents' back yards because we cannot afford to buy stands."

Another community in Ngodini, near White River, also moved onto vacant land allocated to a local high school for a sports field.

Most of the land grabbers were young people who are working but said they could not afford to buy empty stands or rent in town.

The public hearings in Vryheid are the first leg of the four-day hearings‚ which will take place in KwaZulu-Natal this week.
News
3 years ago

"We know the area is not yet in the council's budget. We will develop it ourselves... What we need is to formalise it and have our title deeds," said another community member.

Mbombela local municipality spokesman Joseph Ngala said the council did not recognise those who invaded the land.

"Let us put it straight that we don't have an area called Nomzamo in our database. These people have created the name and settled there. It's wrong and setting a wrong precedent," said Ngala.

"As we are having a new settlement across that land in question, that area was for a business hub where we thought shops and other businesses will be housed."

An owner of a portion of the invaded land has opened cases against the new residents.