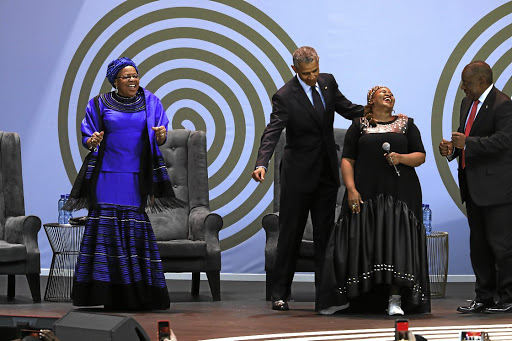 Nelson Mandela's dream of a just world where all enjoy democratic rights is still possible, but faces a threat from greedy elites who run global affairs.

This was the central message of former US president Barack Obama when he delivered the centennial edition of the annual Nelson Mandela lecture at the Wanderers Cricket Stadium in Johannesburg yesterday.

"Yes we can. Yes we can," chanted the crowd at the stadium as Obama stood up to deliver his speech.

He paused and smiled to acknowledge them; and in true Obama style went on to deliver another oratorical masterpiece.

The former US head of state rebuked the current world order, saying racial and gender discrimination were still prevalent despite economic and social advances.

"Women and girls around the world continue to be blocked from positions of power and authority. They are still paid less than men for doing the same work."

He contrasted the current sense of despair over world politics to the hope of peace and progress that followed Mandela's release from prison in 1990.

"An entire generation has grown up in a world that has got steadily freer, wealthier, less violent and more tolerant during the course of their lives.

"It should make us hopeful, but if we can't deny the real strides our world has made since that moment when Madiba took steps out of confinement, we have to recognise ways in which the international order has fallen short of its promises."

The United Nations is also running an exhibition at its New York Headquarters entitled “Building on the Legacy of Nelson Mandela - NYC”.
News
2 years ago

Obama told the crowd that included Mandela's widow Graca Machel and President Cyril Rampahosa that he was inspired by Mandela's vision.

"I believe in Nelson Mandela's vision. In the vision shared by [Mahatma] Ghandi and [Martin Luther] King, in a vision of equality and justice, freedom and multiracial democracy built on the premise that people are created equal.

"A world governed by such principles is possible and it can achieve more peace and more cooperation to pursue a common good.

"I believe we have no choice but to move forward," he said.

Obama also warned that countries and governments that advance nationalism and xenophobia instead of opening their borders to genuine migration and globalisation were doomed to failure.

"Countries that rely on nationalism, xenophobia and racial superiority; those countries find themselves consumed by civil war or external war. Technology cannot be put back in a bottle.

"We are stuck with the fact that we live closer together and populations are moving. The only way to address climate change, mass migration, pandemic disease is to develop more international cooperation, not less."

Taking a tacit dig at the immigration policy of his successor Donald Trump, Obama said it was possible for countries to enforce proper border control while respecting human rights.

"It's not wrong to insist that national borders matter, that laws need to be followed. But that can't be an excuse for immigration policies based on race, ethnicity or religion. We can enforce the law while respecting the essential humanity of those striving for a better life," he said.

Obama urged those who have to give more to those who do not have instead of acquiring things they do not need.

"Right now I'm surprised at how much money I have. There's only so much you can eat."

World communities, he added, should protest against injustice in the same way that Mandela fought for freedom.

Earlier, Machel paid tribute to her late husband, describing him as a skilful strategist, visionary statesman and icon who inspired not only South Africa but the world at large.

"Madiba was a selfless symbol of unrelenting resistance, resilience and victory. He embedded the sacrifices of millions to overthrow apartheid; incredulous in strength and character. His was a narrative that good can triumph over evil," she said.

US saxophonist Kirk Whalum, local afrosoul sensation Thandiswa Mazwai and Zimbabwean singer Oliver Mtukudzi were some of those who performed for the crowd.

Former president of the United States of America Barack Obama delivered the 2018 Nelson Mandela Annual Lecture in Johannesburg on July 17 2018, marking the 100th anniversary of Mandela’s birth by reflecting on his example of perseverance and vision and what lessons can be drawn from his legacy.