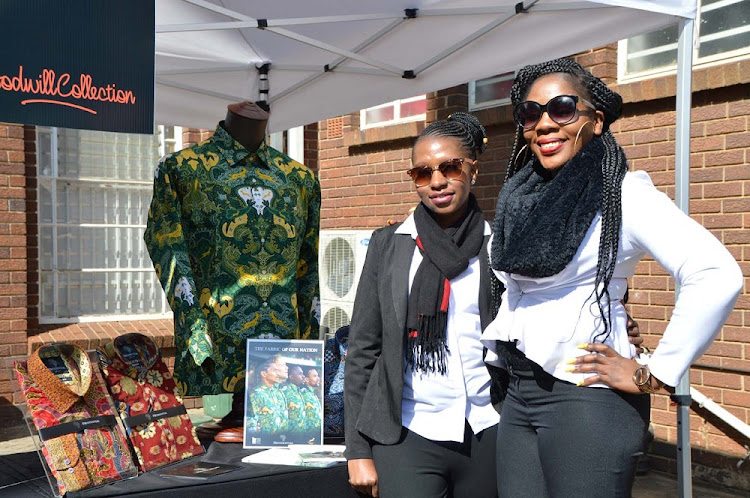 Tsitsi Chakomoka and Precious Masondo from Presidential, a clothing company that produced the famous Nelson Mandela shirts, at the Wanderers Stadium in Illovo for the 16th Nelson Mandela Annual Lecture on July 16 2018.
Image: Kgothatso Madisa

The centennial edition of the annual Nelson Mandela lecture at the Wanderers Cricket Stadium in Johannesburg yesterday was a bit nostalgic, especially for those who watched or attended his funeral.

The spirit of Madiba was evident as dignitaries walked among ordinary guests and security was not tight, although the mood was different from December 2013. This time joy filled the hearts of patrons as they celebrated Madiba's centenary.

Walking around the area where former US president Barack Obama delivered the lecture, guests were met by smiling staff who handed them blankets and the official lecture book, among other things.

The mood inside the stadium was nothing short of amazing as VIPs purchased a variety of collectables at the stalls, including Mandela books and his famous shirts.

The books ranged from the letters Mandela wrote from the cells on Robben Island and Dare Not Linger: The Presidential Years, which has been described as the continuation of the popular biography Long Walk To Freedom.

Mongezi Njaju from the Nelson Mandela Foundation said they brought the books to the lecture as a way to promote Mandela's legacy.

"The response has been good, I'm not good with statistics but I can tell you four out of five people who are approaching us, they buy something," said Njaju.

At another stall nearby, one is immediately attracted by the hand-printed batik shirt, famously known as the Madiba shirt.

The shirts hanging at the stall are designed and made by Desre Buirski, who can be regarded as the person who changed Mandela's sense of style.

Buirski gave Mandela his first shirt in 1994. He wore it to the rehearsals of the opening of parliament.

"We have popular shirts that Nelson Mandela actually wore, including the Madiba Classic which he wore on one of his birthdays, which was grey in colour," said Tsitsi Chakomoka, from the company that manufacturers the shirts.

"Fortunately, it was also chosen by the Springbok team and we produced the same shirt in a different colour."

Pupils were bused in from different schools to be part of the celebrations and to listen to Obama's speech. They ululated as he addressed them.