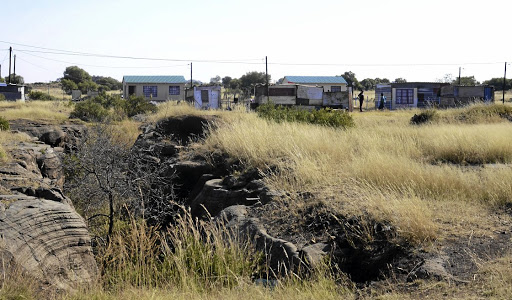 Ottoshop residents are living on dolomite land where sinkholes occur when there is too much weight on the land. The big holes are dangerous for children, especially when it rains.
Image: Tiro Ramatlhatse

North West residents have decided to stay on a dolomitic land in the hope that the government will compensate them and move them to a safer neighbourhood.

Two years have passed since the Mahikeng local municipality and the department of local government and human settlements told residents of Ottoshop near Mahikeng that the area in which they built their houses was hazardous.

Those living in shacks were told to remove them and re-erect them in a safe area chosen by the municipality.

The residents said they were told that moving a number of them to other land would reduce the weight on the land, minimising the risk of sinkholes for those who had already built houses.

The remaining residents said they were told the municipality and local government were going to source money to compensate them as they will eventually have to move.

Residents said more sinkholes have been reported to the municipality. "We are living in fear, we see stories of sinkholes swallowing people's cars and houses, we are scared for our lives," said 68-year-old Dikeledi Motsoatsoa.

A gaping sinkhole growing wider and deeper by the day in the backyard of pensioner Dorah Ngoako is threatening the safety of her family.
News
3 years ago

Motsoatsoa has a seven-roomed house that her husband built 12 years ago.

"They carried out a survey and said when there were fewer shacks, the weight of the land gets lighter. [But] now we are experiencing sinkholes, whose fault will it be if we die?"

Another resident, Motlalepule Mokgosi, said it was difficult to move as she had already built a house. She said it was hurtful to see her neighbour having electricity because she was in an RDP house not affected by the dolomite.

Local government and human settlements spokesman Ben Bole said: "We made due diligence with the construction of the RDP houses. We put up structures that will be able to mitigate the dolomite."

He said they used materials on those RDPs constructed which would not have an effect on the dolomite.

Bole said the matter of relocation was a competency of the municipality. "They are the land holders, so if they intended removing them from dolomite, they must first find land for those people."

Municipality spokeswoman Yoliswa Tiro said it was a local government and human settlements' competency to compensate the residents but she needed to verify it. "I will need to go and check whose fault that was and come back with an informed response."

She had not done so by the time of going to press.

A technical team was expected to meet on Sunday afternoon to discuss and come up with a plan to deal with the gaping sinkholes on the R55 Quagga Road ...
News
3 years ago
Next Article