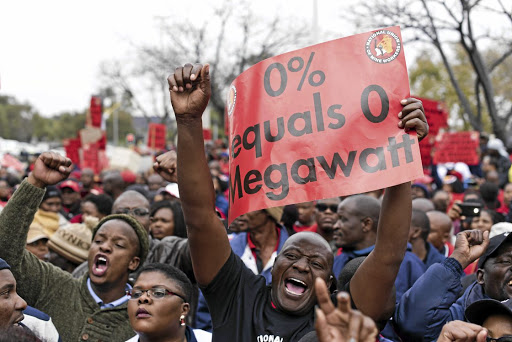 Cash-strapped Eskom may have to shed jobs to afford the 7.5% salary increase offer it has tabled to its unions.

Energy expert Chris Yelland said Eskom was already having difficulties borrowing money because its debt levels and cost of debt were very high and there were no other options of raising money to cover the additional costs.

"Obviously it's a very politically sensitive matter because it's the middle of wage negotiations... it's [job cuts] not something Eskom wants to speak about but it has already said that it's significantly overstaffed and somehow it has to bring its cost items under control.

"It's hard to understand where this money is going to come from. operations at Eskom are resulting in a loss."

Another expert, Ted Blom, said: "I don't think Eskom has any option ... ultimately it has to do something about its productivity, which is one of the worst in the world."

Power utility Eskom has said that it could meet proposed‚ significantly stricter pollution emissions standards‚ but that the South African public ...
News
4 years ago

Eskom spokesman Khulu Phasiwe did not completely rule out job cuts but said they were not being considered at the moment.

"So far, and so far is a key word on this one, the issue of job cuts is not on the table."

He said Blom and Yelland were "100% correct" to say
Eskom did not have money to fund salary increases.

"That's why we were offering no increases but because we are led by a responsive and responsible management, they have taken it upon themselves to see what else can be done to find this money from somewhere, even if we don't have it at the moment."

The World Bank had already stated that Eskom employed over 27500 more staff than it should have for the amount of energy it produces.

The unions' revised demand was standing at 8% but they took the 7.5% offer back to their members for feedback today.

Phasiwe said they were hopeful an agreement would be reached today.

"We first met on May 10, before the soccer World Cup which has come and gone. We would like to start focusing on turning around this company."