Engineers change the future of farming 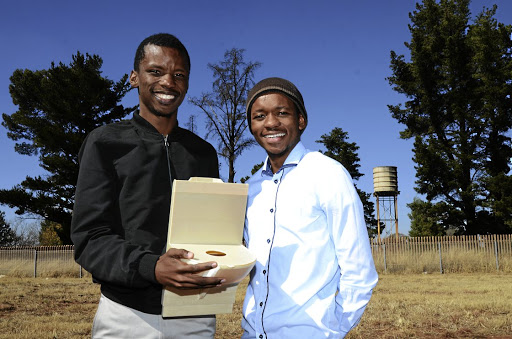 Engineers Mogale Maleka and Tumelo Pule have come up with hydroponic farming system that will change the future of agriculture in SA.
Image: Mduduzi Ndzingi

Two mechanical engineers have used their technical expertise to make soil-less farming more efficient by building a system that relies on 20 hours less of electricity than what is currently being sold on the market.

Business partners Mogale Maleka and Tumelo Pule, who are both 25 years old, ventured into hydroponic farming, also known as soil-less farming, after graduating with their honours degrees from the University of Johannesburg (UJ) in 2016. This type of farming does not require the use of soil but relies on water and fertilisers to hydrate and feed plants.

"In all honesty we have experienced issues of power failures which has caused our plants to die. My engineering mind said we need to find a way to fix this," said Pule. Hydroponic farming helps farmers avoid having their produce harmed by pests found in soil, diseases and weeds. It uses 90% less water than soil farming and allows for more plants to be grown in smaller spaces.

This type of farming is possible because plants such as spinach, lettuce, herbs and strawberries do not need to be submerged in the soil to grow. In these instances, soil is mainly used as an anchor for the plant and science allows for farmers to use other methods to keep the plants stable.

"Hydroponic systems need to feed the plant with water and nutrients continuously, which means that within an hour of electricity being gone, the plant will wilt and eventually die," said Maleka.

A passion for working the land cultivated into reality

Their hydroponic planter is able to situate the water and fertilizer in a small reservoir without drowning the plant.

This means that water only needs to be pumped for four hours in a day, while traditional systems need water to pump for 24-hour periods to continuously feed and hydrate the plant.

The entrepreneurs said hydroponic systems are the future of farming.

"It is our belief that farming will need to rely on hydroponics because of issues such as urbanisation, climate change and an increasing population growth," said Pule.

Maleka said they had previously used the traditional hydroponic systems but found that they were not effective when combined with South Africa's load-shedding problem.

It took them seven months to finish their prototype, which cost them R28000.

"We were lucky enough that the University of Johannesburg believed in us and have given us a seed fund for our hydroponic planter," said Maleka.

The young innovators have plans to commercialise their product by selling it to farmers and eventually to households that want to grow their own produce.

Sipho Mahlangu from UJ's Process Energy and Environmental Technology Station (UJ PEETS) said the hydroponic planter was fascinating and innovative and that they would be assisting them in finding more funding to take it forward.

Khanya and Lilitha Bam are hoping redistribution of land will benefit their already thriving egg-hatching business.
News
3 years ago
Next Article