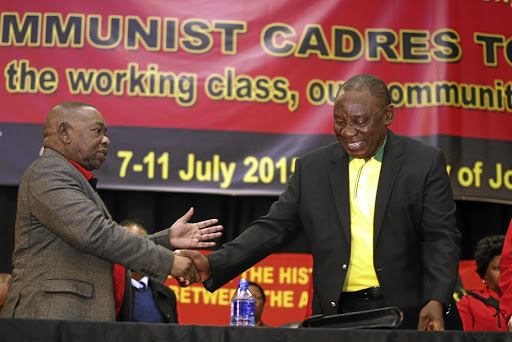 That is the buzzword favoured by SA Communist Party leaders when they talk about the change they want in their relationship with the ANC.

But what does it mean in practice? Well, a new SACP discussion document sheds light on how the Blade
Nzimande-led formation wants to relate to Luthuli House and government.

If all that is being proposed in the document was to become a reality, the ANC would effectively "co-govern" with its alliance partners - with ministers, MPs and other political appointments being made after agreement from all parties.

The ANC has been in alliance with the SACP for over five decades, and with Cosatu and the SA National Civic Organisation (Sanco) since the unbanning of liberation movements in 1990.

But now the SACP and Cosatu are unhappy with a situation where Luthuli House decides who goes to parliament and the president of the party and country decides on the composition of the cabinet.

NUM slants towards links with Numsa

NUM leadership that is said to be sympathetic to Zwelinzima Vavi has fuelled talks of a possible merger.
News
4 years ago

Among the radical changes the SACP wants is that each member of the alliance should draw up its own list of candidates for parliament, the provincial legislatures and municipal councils.

These lists would then have to be "consolidated" into one after horse trading by the partners.

"The current situation where all alliance partners are, for example, confined to an ANC [only] selection process in regard to election- linked deployment and related processes must be reviewed," the SACP document says.

The document further proposes that the ANC government should consult all its alliance partners before taking any decisions in government. These include reshuffles in the three spheres of government - municipal, provincial and national - as well as when it implements policies that affect service delivery.

The proposals were discussed at the party's central committee meeting at the weekend and will also be tabled before the other alliance partners.

Although it agrees that changes need to be introduced in the alliance, it is unlikely that the ANC would support steps that would shift power from Luthuli House, which it dubs "the centre of power".

Some ANC leaders have accused the SACP of trying to weaken the ruling party and forcing it into a "coalition government" with its own alliance partners.

SACP says Lekganyane is not fit to lead the ANC

The SACP is up in arms against its former Limpopo leader Soviet Lekganyane contesting for the position of ANC provincial secretary this weekend.
News
4 years ago

But the SACP documents disputes this. "It is important to underline that this principle is neither a liquidationist position directed at the ANC nor a departure from the strategic character of the alliance to a coalition politics," it says.

In terms of the document, former president Jacob Zuma would have had to consult the SACP before removing SACP central committee member Yunus Carrim as communications minister in 2014.

Ahead of last year's ANC national conference, the SACP threatened to go it alone if - among other things - the ANC refused to reform the way the alliance functions.

However, since President Cyril Ramaphosa became leader of the ruling party, the threat from the SACP has subsided, with its leaders opting to persuade the ANC through discussions behind closed doors.