Anti-EFF bias at the SABC - Ndlozi 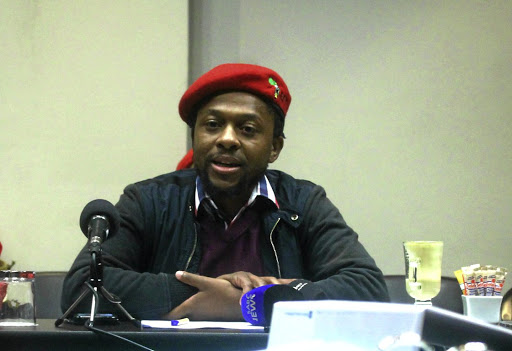 Mbuyiseni Ndlozi says Hlaudi Motsoeneng is one of the executives who prevented the SABC from covering EFF events.
Image: KABELO MOKOENA

The EFF claims to have suffered a direct victimisation and marginalisation in the hands of SABC senior executives.

They named former SABC chief operating officer Hlaudi Motsoeneng and former acting chief executive Jimi Matthews as some of the executives that prevented the public broadcaster from covering their events.

The acccusation was made by EFF national spokesman Mbuyiseni Ndlozi in a submission to the SABC's inquiry into editorial and political interference in Milpark, Johannesburg, yesterday.

The inquiry, which is chaired by veteran journalist Joe Thloloe, was launched by the SABC last month as the public broadcaster sought to restore its credibility.

"We have been a direct victim of editorial interference and marginalisation in the SABC," Ndlozi said.

Ndlozi said the EFF was "marginalised" as a new player ahead of the 2014 elections.

"Perhaps our open challenge of the SABC decision to ban the EFF advert during 2014 general elections could be considered the highest mark of our disapproval.

Gordhan is 'the real president of South Africa', says Malema

"EFF has been deliberately marginalised in the SABC, something we placed on the shoulders of then acting head of politics Mzwandile Mbeje, COO Hlaudi Motsoeneng, Jimi Matthews and Nothando Maseko, who later acted as head of news."

The SABC banned an EFF advert which evoked the Marikana massacre.

The EFF accused the ANC of having an uncontrollable desire to turn the SABC into a state broadcaster.

"This experience must force us to reflect about the editorial policy practices of the SABC which have been clearly interfered with," Ndlozi said.

Thloloe said they were trying to get the SABC to do the best that it can.

"We have agreed that every South African and every political party can make suggestions to the SABC," said Thloloe.

In its submission to the inquiry two weeks ago, the ANC said it wanted a bigger slice of the SABC's coverage to reflect its electoral support ahead of the 2019 general elections.

'Would I apologise to you? No!' says Jacques Pauw to Julius Malema

The gloves have come off in a war of words between investigative journalist Jacques Pauw and Julius Malema over who helped settle the EFF leader’s ...
News
3 years ago
Next Article