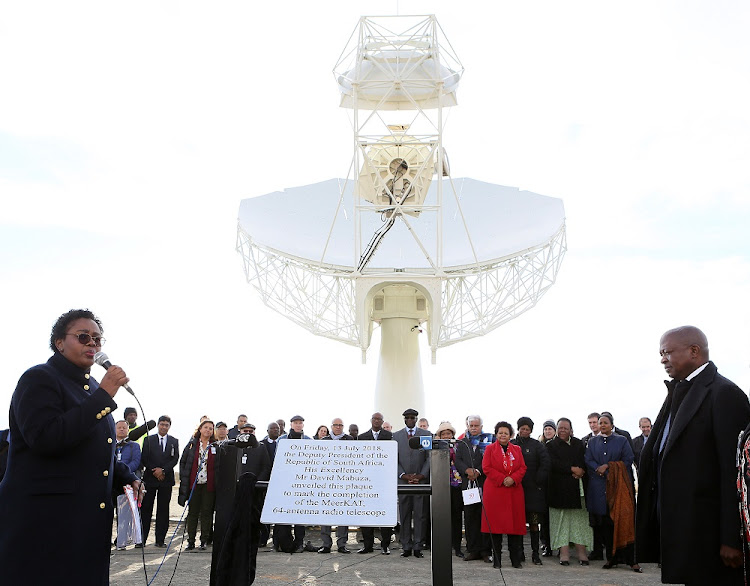 Deputy President David Mabuza‚ Minister of Science and Technology Mmamoloko Kubayi-Ngubane and Minister of Higher Education Naledia Pandor at the launch of the MeerKAT radio telescope in the Northern Cape on July 13‚ 2018.
Image: Ruvan Boshoff

The world’s largest radio telescope‚ the MeerKAT‚ was launched in the Northern Cape on Friday.

The R4.4-billion radio telescope project was unveiled some 70km from the tiny town of Carnarvon in the vast big-sky landscape of the Northern Cape‚ where any interference to the signals are minimal.

Speaking at the launch‚ Deputy President David Mabuza said the project should grow opportunities for South Africa’s next generation‚ adding that it is “in line” with the National Development Plan.

“In mobilising our nation to respond to the emerging opportunities that are presented to humanity by the evolution of science and technology‚ our government has committed to transformative science‚ technology and innovation‚” said Mabuza.

“This commitment takes into account the evolving debate‚ research output and inventions precipitated by the evolution of the fourth industrial revolution.”

That revolution is all about the fusion of technology and reality — and given the vastness of space‚ we are only just beginning.

The MeerKAT is now the world’s largest radio telescope and is a precursor to the Square Kilometre Array (SKA)‚ which falls under the Department of Science and Technology.

It will later be integrated into the SKA‚ which will be 50 to 100 times more sensitive than any other radio telescope on earth.

“The SKA is expected to address fundamental questions about the universe‚ including how the first stars and galaxies were formed‚” says spokesperson Lorenzo Raynard.

From today‚ MeerKAT begins its operations: revealing extraordinary detail in the region surrounding the supermassive black hole at the centre of our galaxy‚ the Milky Way.

We're reaching for the stars‚ Mabuza says at MeerKAT launch

He said the project should grow opportunities for South Africa’s next generation and that it is “in line” with the National Development Plan.
News
3 years ago

“We wanted to show the science capabilities of this new instrument‚” said Fernando Camilo‚ chief scientist of the South African Radio Astronomy Observatory (SARAO)‚ which built and operates MeerKAT in the semi-arid Karoo region.

“The centre of the galaxy was an obvious target: unique‚ visually striking and full of unexplained phenomena — but also notoriously hard to image using radio telescopes‚” said Camilo.

The centre of the Milky Way is 25‚000 light years away from Earth. Lying behind the constellation Sagittarius (also known as “the teapot“)‚ it is always obscured by gas and dust‚ making it “invisible from Earth using ordinary telescopes“.

“Although it’s early days with MeerKAT and a lot remains to be optimised‚ we decided to go for it and were stunned by the results‚” he said.

“This image is remarkable‚” says black hole expert Farhad Yusef-Zadeh of Northwestern University in the USA.

He said the MeerKAT “shows so many features never before seen” that it could provide the key to cracking the code of some of our astronomical riddles.

“It’s an exceptional achievement — congratulations to our South African colleagues‚” he added.

“They’ve built an instrument that will be the envy of astronomers everywhere and will be in great demand for years to come.”