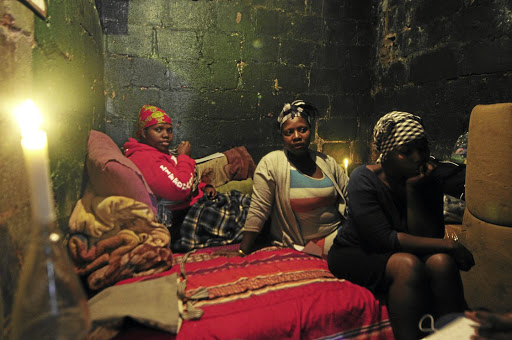 Mpho Mache, left, grieves for her son Kopano, who died on Monday when his family's shack caught fire. Sitting next to her are her sisters Lerato and Elisa Mache.
Image: THULANI MBELE

Four days after her brother's death in a horror shack fire that gutted her family's home, nine-year-old Paballo Mache is still in the dark about her four-year-old sibling's death because her family cannot bring themselves to tell her that the brother she tried to save is no more.

Kopano Mache was burnt beyond recognition when a blaze engulfed his family's four-roomed home at Freedom Charter Square in Kliptown, Soweto, on Monday.

Kopano was in the house with Paballo when the tragedy struck. Their mother, Mpho Mache, 27, had locked them in the house when she went to her brother's house - a few metres away.

"It was a big fire. The whole house and the burglar bars were red. I don't know how my daughter managed to get out. When I asked her where her brother was, she said he was on the bed where I left him. She said she tried to carry him but she suffocated from the smoke. She said the fire had made a circle around them," Mache said.

Kopano Mache, 4, was killed in a shack fire.

Mache's sister, Lerato, 28, said the boy's charred body was found on top of a pile of blankets.

"It looked as though he tried to get off the bed and he got trapped," she said.

Lerato said it was difficult to tell Kopano's three siblings that he had died in the fire. "His sister is not okay. She plays but we can tell that she is sad. She regularly asks where her brother is and we tell her that he is in hospital because he got hurt in the fire," she said.

"They are children, we can't just tell them. She is more traumatised because she was there. We are waiting for the right time to explain to them that their brother is no more," she said.

Mache said she had just bought Kopano new clothes for a pyjama party he was supposed to attend at his day care centre today.

"I locked the burglar door when I left because I could not just leave the house open. I left him sleeping on my bed. He slept early that night because he had been dancing around the house because of the new clothes I bought him.

"He had been fitting the clothes earlier with his sister, he fell asleep on the floor before I took him to my bed," she said.

Mache said she had been at her brother's house for a few minutes when someone stormed in, saying there was fire at her house.

She said her brother and neighbours managed to bring down part of the shack on the side where her bedroom is to gain entry into the house.

"My brother went in, checked on the bed and dropped to the floor and cried. That is when I knew that it was over with my child," she said.

Mache described her son as an active child who was loved by people in his community. She said her family had celebrated her son's birthday a week before.

"He was a happy child. People loved him. They called him Zuma because he was naughty and his head had a similar shape as [that of former president Jacob] Zuma's," she said.

Mache said her family lost everything in the fire, including IDs, clothes and her children's school uniforms.

Police spokesman Captain Hitler
Ngwenya said police were investigating the cause of the fire.

Sister blames herself for sibling's murder