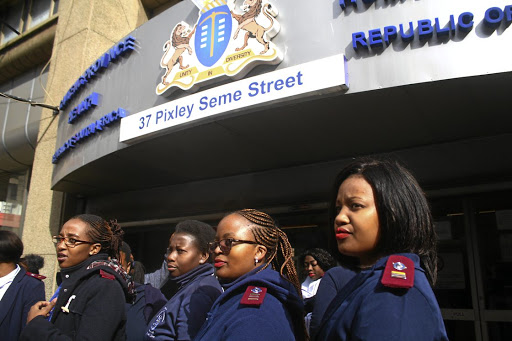 Nurses stand outside the department of health to air their frustration over performing duties meant for professional nurses while being paid community service salaries. / KABELO MOKOENA

A 31-year-old community service nurse is forced to perform specialist duties inside a neonatal intensive care unit without supervision.

Yesterday, Portia Tshabalala was among a group of frustrated health workers from the Telle Mogoerane, Sebokeng and Far East Rand hospitals who have been working as community service nurses for close to three years instead of one year.

This is despite the fact that they have to take up the duties of officially recognised professional nurses.

Yesterday, the nurses dressed in full uniform, handed over a memorandum to department officials while demanding to be allocated posts.

Tshabalala said they were tired of performing duties meant for professional nurses while being paid community service salaries.

She said she was sometimes expected to perform exchange blood transfusions to treat infants with serious cases of jaundice.

The procedure involves extracting a certain amount of blood from a patient and replacing it with donor blood.

"I perform professional nurse duties on my own without direct supervision," Tshabalala said. She said most people were frustrated and emotionally drained because of the situation they work under.

Dozens of cats roaming the corridors and wards at Mmametlhake Hospital in Mpumalanga, eating food off trolleys and jumping on beds have become a ...
News
3 years ago

"There was no greater feeling than walking into Stutterheim Hospital no longer as a cleaner, but clad in a white dress because I was now a nurse."
News
3 years ago

Tshabalala said the salary they were earning was not enough to cover their needs.

"I want to study further but the money I'm getting is too little," Tshabalala said.

Another nurse, Lebohang Nkoana, said the department had advertised posts for specialist nurses but was failing to absorb community service nurses who have been rendering those services.

"This also impacts on the academic improvement of an individual because if you want to further your studies, you cannot do that because the department recognises you as a community nurse or as a student," Nkoana said.

He said their salaries remained stagnant while petrol and food continued to go up.

Nkoana said he had been working since 2015 but the situation was not changing.

Bibi Chapola, 28, who is enrolled as a nursing assistant, said people were discouraged by the situation.

"My hope was that I would be able to finish my studies, get a job and further my studies by specialising in midwifery."

General secretary of the Young Nurses Indaba, Mduduzi Ndlovu, said the problem had existed for years. Ndlovu said community services nurses were unable to look for employment elsewhere and study because the department had not offered them post-qualification experience. "Without that they were as good as useless."

He said this was also risky as nurses were taking on specialist duties without the proper training.

The department of health did not respond to questions sent to it yesterday.