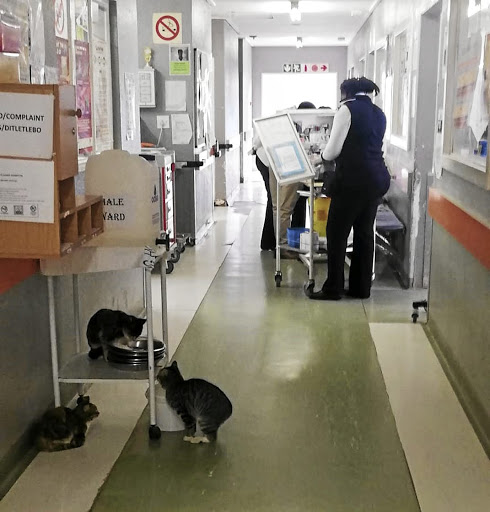 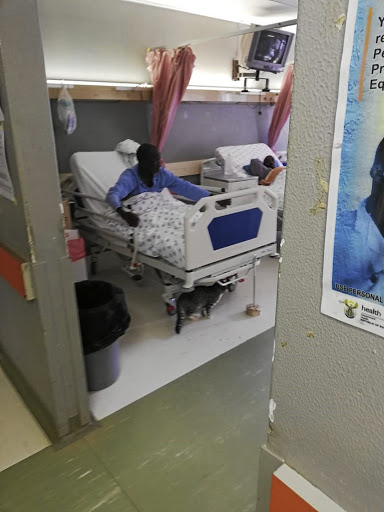 Dozens of cats roaming the corridors and wards at Mmametlhake Hospital in Mpumalanga, eating food off trolleys and jumping on beds have become a nuisance.

Concerned staff and patients told Sowetan that the cats scour the halls and wards looking for trash food scraps discarded by visitors and hospital patients.

One patient told how the situation has got out of control with the cats grabbing food from their plates before dashing off. Another female patient terrified of cats was forced to cover herself with linen for her to eat in peace.

"[Last week] a huge, scary black cat came straight to my bed during supper and grabbed a piece of meat from my plate.

"The cat simply sat on the floor and ate my meat as I screamed for help. This place is dodgy. How can you have animals in a hospital with sick people," said the 22-year-old in the maternity ward.

She said she was relieved the nursery door was always closed as she does not want a cat near her baby.

Sowetan spotted at least six cats in the male ward, with three cats salvaging leftovers from patients' plates lying on a trolley on the passage while others patrolled the wards.

A male patient watched wide-eyed as a black cat strolled into the ward and under his bed, searching for anything to eat.

"About four years back there were two cats but now there are over 20 cats prowling the wards. We have to keep the kitchen door closed all the time to prevent them from going in. Some patients are scared of cats, some are allergic to cats but nothing is being done to get rid of the cats," a nurse said.

Another patient from Kameelrivier who asked not to be named said they were unable to sleep at night because the cats make noise when they fight and jump onto their beds to sleep.

"They know the sound of the food trolley. Once they hear the trolley, they come into the wards. The cats would simply help themselves to food of those unable to sit up. It is bad," she said.

Mpumalanga department of health spokesman, Dumisani Malamule, said they had asked the Society for the Prevention of Cruelty to Animals (SPCA) for help.

"We know about the cats. We have called the SPCA on site and they confirmed that [the hospital] is infested," he said.