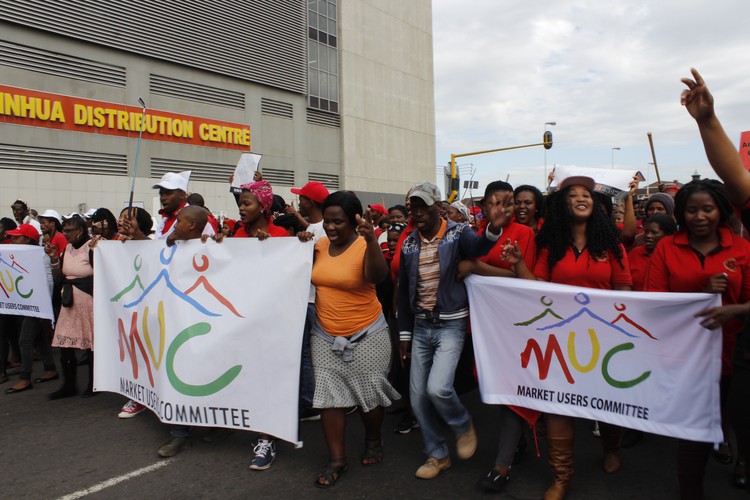 Informal traders and supporters marching to the City Hall in Durban on Friday to protest proposed regulations which they say will prevent many people from earning a living.
Image: Nomfundo Xolo

Hundreds of informal traders marched to the City Hall in Durban on Friday over new regulations they say will deprive them from earning a living.

The informal traders are against proposed by-law changes to be implemented by the eThekwini Municipality as part of its inner city regeneration plan. They say more than 280 informal traders would be negatively affected by changes.

According to a statement on the municipality’s website‚ the proposed changes to the by-law relates to issues of non-compliance and law enforcement. “Key aspects highlighted in the by-law include prohibiting trading in places where informal trading is restricted‚ confiscation of goods‚ regulation of abandoned goods and plans to crack down on people trading without permits‚” it stated. The by-law was last amended in 2014.

On Friday‚ the Market Users Committee (MUC) organised the march with traders who were supported by other local organisations. They also demanded that a commission of inquiry be held into the allocation policy for trading sites and allocation procedures.

The group handed over memorandums to the mayor’s office and the office of the provincial minister for economic development‚ tourism and environmental affairs.

MUC chairperson Nico Magwaza said the City refused to work with traders to find a solution. He said the City’s plan was first introduced to traders as a “clean-up” and a bid to create “safer places” in the city.

“Instead it is violating the rights of these people who depend on selling on the streets. There are people who have been street vendors for more than 15 years but still do not have permits. The allocation procedure is blatantly corrupt and this needs to stop.”

Magwaza said some traders had to bribe officials to get permits. “When they apply legally for permits they are denied without any answers or updates.”

Thembelihle Gumede has been a street trader for five years. She shares a table with her mother‚ who has been selling sewing material for 40 years. She said that she has been waiting for approval on her permit from the business support and markets unit for a year.

“They come at us daily‚ demanding permits that they are ironically denying us. They take your goods and throw them into the waste truck. You are lucky if they only throw out your crates and tables. You can lose up to a month’s earnings. We come from impoverished families but do not deserve to be treated like this.”

Alex Saidi sells school shoes and safety boots in Dr Pixley Kaseme Street. He said that he only trades after certain hours to avoid being targeted by law enforcement officers.

“We would like to sell freely and peacefully. We’re selling food and not drugs. This treatment should rather be focused at drug dealers who are selling drugs freely on the notorious streets of Durban.”

Representatives from the two offices accepted the memorandums and promised to pass them on to the relevant officials. Mlungisi Ntombela from the mayor’s office said they would respond to the trader’s demands within seven days.