Triplets for teen couple - 'we are prepared' 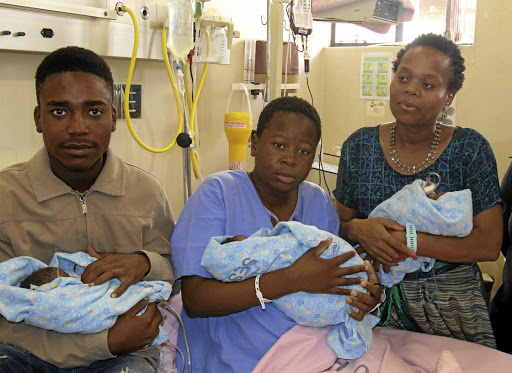 High school sweethearts Kholofelo Moholola, 18, and Nimrod Magolo, 19, have welcomed the birth of their triplets - two girls and a boy - with excitement.

The Grade 12 pupils at Molautsi Secondary School at Blood River, a village in Polokwane municipality, had been dating for a year and seven months.

Moholola delivered the trio of two girls, Bontle and Tshiamo and a boy, Neo, naturally in less than 30 minutes on Wednesday at the Seshego Provincial Hospital in Limpopo, according to Dr Ewan Omozuanibo.

The couple said while expecting their children they had been studying together for their mid-year matric exams.

"I wrote my mid-year exams very well because we were studying together. Before I was admitted we were preparing for our trial exams in September," Moholola said.

She said she was shocked when the doctor told her she was about to deliver three bundles of joy.

She said during regular medical check-ups she'd been assured she was expecting twins.

"I thank God for this gift, they are my first babies and I'm happy that they are healthy. I also want to thank the doctor and midwives for the support during my children's birth," she said.

Magolo said though he was not working, his parents will support him in raising his kids while finishing his matric and mapping out his future.

"Both my parents are working and they have been supportive of us and they promised they will be there for my children," he said.

Magolo said he considered himself lucky to be a father of the three bouncing babies.

"I'm lucky because not everyone gets to have triplets. I think I took my genes from my father' side, he is a twin," he said.

Magolo said he was optimistic he will complete his matric and further his studies.

"I will decide what to study after completing my matric, but I'm certain I will be able to build a future for my children."

The trio's grandmother Itumeleng Moholola, 35, was delighted to welcome the triplets.

"I know it is not going to be easy raising triplets, it's going to be expensive but we are prepared," she said.

Limpopo MEC for health Phophi Ramathuba said she would buy Moholola a breast pump to help her to feed the babies properly.

"We urge the mother to breastfeed the babies so that they can be healthy. We would like to congratulate all the staff that was involved in delivering these babies," she said.