Do healthcare workers have the right to strike? 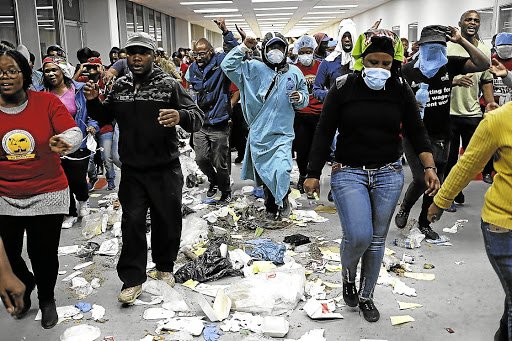 The Charlotte Maxeke Hospital in Johannesburg was thrown into chaos when patients were turned away and surgery interrupted as workers embarked on strike action over wages. / Alon Skuy
Image: ALON SKUY

Just because healthcare workers are providing an essential service does not mean they can't protest - or does it?

The South African Human Rights Commission (SAHRC) hosted a dialogue yesterday in Johannesburg on striking a balance between the right to access of healthcare and the right of healthcare providers such as nurses to protest.

"When people don't have a health service, they are incapacitated in a whole number of ways. To deny anyone access to healthcare services
is unlawful. Whatever the cause, it's unlawful and it's a violation of rights," he said.

"Even if unintentional, some of the protest actions and strikes have denied [people] access to healthcare services.

"The question is: how do we protest in a way that doesn't lead to loss of life?"

Heywood said corruption, mismanagement and underfunding of chronic treatments are key drivers of the decline in healthcare provision, and that beyond these systematic problems, workers should ensure that the expression of their grievances does not come at the expense of healthcare users.

The dialogue was held to work out the true impact that strikes have on healthcare. It follows lengthy labour action by healthcare providers in Mahikeng, North West, and at Charlotte Maxeke Academic Hospital in Johannesburg.

Violent protests calling for the resignation of former North West premier Supra Mahumapelo resulted in the collapse of healthcare in the province. Hospital staff were barred from accessing patients and performing their duties. Lives were reportedly lost as a consequence.

In May, healthcare providers at Charlotte Maxeke went on strike over unpaid bonuses. They blockaded gates and entrances to the hospitals and scattered rubbish in the main foyer.

Putting North West into perspective, Stats SA spokesman Ashwell Jenneker said it was a province with a high rate of dissatisfaction towards public healthcare.

He added that factors such as where people live, the state of their environment, genetics, income and education level all have a considerable impact on health.

Provincial secretary of the Democratic Nursing Organisation of SA, Cassim Lekgoathi, said: "Do we have to wait for people to embark on a strike when the health services are already on the verge of collapse? "The lack of education, severe shortage of staff and lack of resources have seriously impacted on the services they render."

Lekgoathi said when the government makes an agreement with employees but does not fulfil it, it provokes workers. "It is worrisome that agreements are made and not implemented," he said. "That's provocation."

KZN health MEC Dr Sibongiseni Dhlomo said it was not correct to say that one is providing an essential service and therefore cannot go on strike. He said as government they ought to not place workers in unfavourable working conditions that could lead to a revolt.