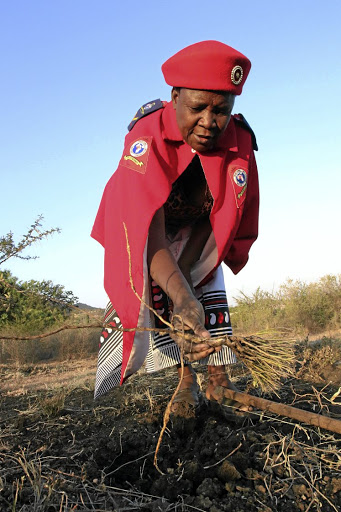 Locals who believe in the power of traditional medicine to help women during childbirth have rejected claims that the methods are contributing to maternal and neonatal deaths.

Traditional healer Mpelegeng Kgwete, 53, from GaSehlako village, outside Burgersfort in Limpopo, said she had helped mothers deliver their babies with her methods since 1998, and none of them had died.

"It is not true. Sometimes people come to us after drinking pills and other remedies they buy elsewhere and we are blamed for their problems," Kgwete said.

She uses herbs and roots picked and dug up from the bushes at the foot of the Leolo Mountains, where she lives, to make a concoction which is meant to help mothers deliver their babies quickly.

"I cook the herbs and when the labour pains start, the woman must drink it."

Kgwete said the other mixture helped if a woman had been bound by malicious spirits which delay childbirth.

"The woman must drink it so that the path can be opened and she does not have to go through surgery."

Another middle-aged woman in the area expressed her trust in the traditional medicine during pregnancy.

"I have two children and I drank herbs to help during labour on both occasions. Everything went well," the 51-year-old said.

She said she learnt how to prepare the herbs from her grandmother.

"But when we get to the hospital we are told to stop using the herbs. But this is what we have been taught by our elders and it has worked."

Sowetan also spoke to a pensioner who said he knew a traditional healer in Taung who helped pregnant women give birth quickly. He said he knew about the healer through relatives who had used his services.

"He is very good. He can make sure that the baby is here in no time," the man said.

"There's no such thing. They are shifting responsibility and blaming traditional healers. In the first place there is no research to prove that," he said.

Hlathi said traditional practitioners were well trained on how to look after pregnant women while administering herbs and other indigenous plants which are safe for both mother and child.

Hlathi said he had personally helped many women to avoid delivering their babies through surgery and none of them were harmed.