A security guard stationed on Atlas Road in Boksburg where a botched cash-in-transit heist happened this morning has told of of how he had to hide during a dramatic shoot out.

The security guard, who asked not to be named said he didn’t realise that a heist was underway when he heard a loud bang followed by gunshots.

“I just saw four men firing at the G4S vehicle and I hid behind a wall because I was scared,” he said.

This is the second robbery in the same area in less then two months.

In May, two cash-in-transit vehicles were attacked and an undisclosed amount of money was taken.

Five suspects were later arrested at the George Goch hostel in Johannesburg.

The security guard said he believes the reason behind the cash-in-transit heists have taken place on Atlas Road is because of a SBV depot in close by. 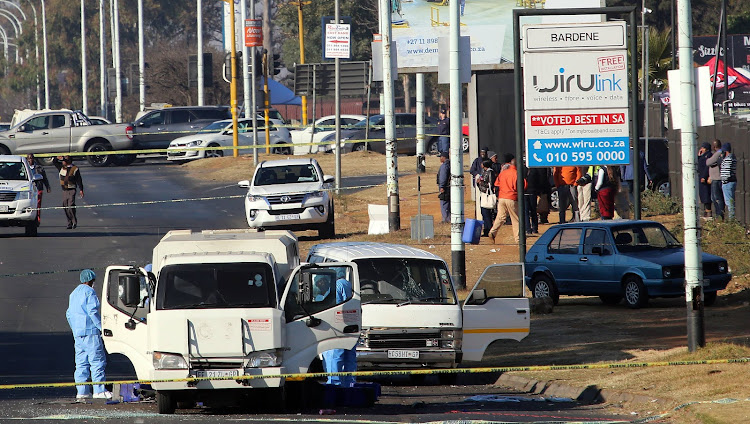 A cash-in-transit robber has been killed following a botched heist in Boksburg, on Atlas Road, east of Gauteng this morning.
News
4 years ago

“I don’t want to say it’s an inside job but there’s a depot close by and that’s where the money comes and I think criminals might be working with security guards,” he said.

Nqubeko Khoza, resident in the area said his family was woken up by a loud bang, believed to be an explosive.

“At that moment I told my wife to check on our children and I ran to the window to see what was happening. I saw a white BMW racing off after a number of shots were fired,” Khoza said.

Police spokesman Brigadier Vish Naidoo said one suspect was shot and killed during the botched robbery while a security guard was rushed to the hospital after being shot in the hand.

“One suspect was killed while the others got away. A security guard was wounded in the hand and rushed to hospital. At the moment details are still sketchy,” Naidoo said.

The body of the suspect could be seen lying on the road while police were still combing the scene for further evidence.