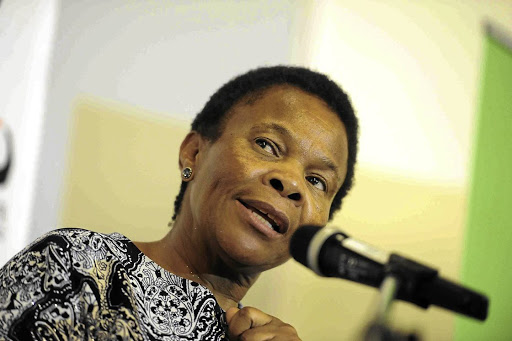 Social Development Minister Susan Shabangu's efforts to clean up the department she inherited from Bathabile Dlamini have sparked fear and panic among senior officials.

This comes after Shabangu stripped acting director-general Nelisiwe Vilakazi of all powers, saying her decision will help improve administrative efficiencies in the department.

Vilakazi was acting director-general before Dlamini was removed as social development minister by President Cyril Ramaphosa earlier this year to serve as the Minister of Women in the Presidency.

The department has been embroiled in conflict with its staff in recent weeks after unions representing the SA Social Security Agency (Sassa) threatened strike action, demanding a 15% salary increase and the payment of the housing allowance to both spouses who are employees of Sassa.

Yesterday, the Labour Court in Johannesburg deferred its decision on an interdict sought by Shabangu, arguing that Sassa employees were essential services workers and therefore could not strike.

On Monday, social grant beneficiaries experienced problems with the electronic payment of their money.

The department has been beset by problems, including the social grants crisis resulting from the declaration of the Cash Paymaster Services (CPS) contract as illegal by the Constitutional Court in 2014.

The cancellation of the contract sparked a drawn-out legal conflict between government and CPS in Dlamini's tenure.

Now, in a confidential letter dated May 31 seen by Sowetan, Shabangu wrote to Vilakazi informing her of the decision to withdraw all delegations in her current position, effectively rendering her unable to perform any functions.

Senior officials who spoke to Sowetan yesterday said that Shabangu was trying to prove that Dlamini failed to perform her duties while she was at the helm of the department.

"She [Shabangu] does not understand how the department works. She does not want to listen to what other senior executives in the department say. Her focus is on the social grants," one official said.

Another official said Shabangu had stopped programmes such as Golden Games, aimed at encouraging senior citizens to adopt healthy, active lifestyles and help them manage their chronic diseases.

The official also said the department held a low-key Child Protection Week this year for the first time.

"She keeps telling people that she will fire people because she comes from the trade union [movement]."

Sowetan understands interviews for the director-general position were held yesterday. Department spokeswoman Lumka Oliphant promised to respond to Sowetan's questions but had not done so at the time of going to print.