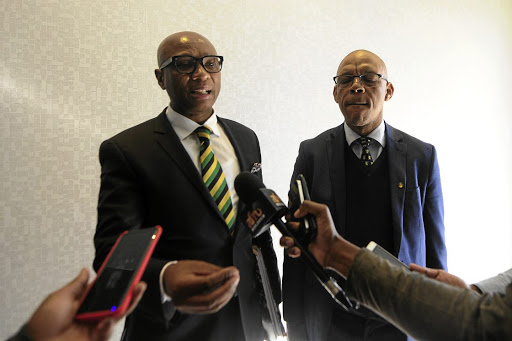 The ANC's Zizi Kodwa and Pule Mabe brief the media after their presentation to the SABC inquiry into media freedom. / Thulani Mbele

The ANC wants a bigger slice of the public broadcaster's coverage to reflect its electoral support.

This was among three key submissions made by the ANC's head of monitoring and evaluation in the Office of the Presidency, Zizi Kodwa, and ANC spokesman Pule Mabe to the SABC's probe into editorial and political interference yesterday.

The governing party has for years been criticised for having undue influence over the public broadcaster, including using it as its mouthpiece and fighting internal contests via its platforms.

Kodwa said their submission touched on the confusion of state and party, balanced reporting and equitable coverage which should reflect the largest political party in the country.

"The ANC enjoys 62% [of electoral support], how that gets carried out is something that in one way or another it must show," Kodwa said.

He said giving a minister a platform on the public broadcaster should not be confused as giving space to the ANC.

"Ministers don't speak on behalf of the ANC ... ministers represent the state," he said.

Political analyst Ralph Mathekga said there were facts that pointed to the ANC having influenced editorial decisions at the SABC, citing an earlier ban on covering violent protests as an example. The ban was later reversed.

"The ANC now wants to draw the line between government and themselves. It's a superficial line because they're the ones that deploy people to government," Mathekga said.

Kodwa confirmed there had been disturbing incidents in the past that "sought to undermine" the independence and mandate of the SABC.

He said the party felt the SABC needed to be protected from undue interference by politicians and members of the board.

"We don't think the minister must call a journalist and say: 'I instruct you...' the independence means you start by employing people that are qualified," he said.

"People who are not qualified are the name droppers who will say: 'I'm here as a deployee of Luthuli House'. We don't deploy people in the management of the SABC."

Mabe said the ANC would do anything to protect press freedom and the independence of the SABC.

"We've also expressed our continued cooperation with the commission to reinforce their work." Mabe said.