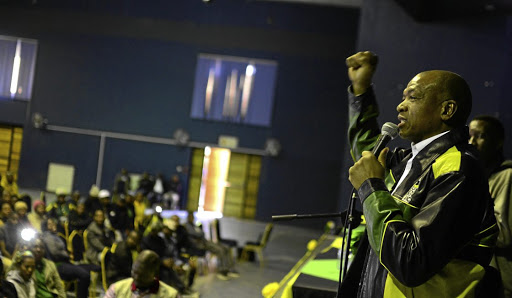 The contest for the post of ANC Gauteng deputy chairman remains open despite regional conferences being held where it was expected that one of the candidates would emerge as a favourite.

With premier David Makhura guaranteed to be elected unopposed as provincial chairman when the party holds its provincial conference later this month, all eyes are now on three men running for the post of deputy chairman.

Gauteng education MEC Panyaza Lesufi, former Johannesburg mayor Parks Tau and economic development MEC Lebogang Maile are vying for the post and have been campaigning hard in the regions for support.

Although the re-election of Ekurhuleni mayor Mzwandile Masina as regional chairman at the weekend is seen as a boost for Maile's campaign as the two are close friends, it emerged at the regional conference that party structures in the area were split between Maile and Lesufi for the post.

Lesufi hails from Tembisa, one of Ekurhuleni's largest townships.

"There are those who want Panyaza and others want Lebogang," said an Ekurhuleni leader. He said he expected the contest in the region to go down to the wire.

Lesufi gave the strongest indication yet that he would contest to become provincial chairman. "I will never defy the wishes of branches. It's all up to them," he said.

Regional spokesman Sonnyboy Masingi confirmed that the region would back Makhura for the provincial chairmanship.

"The popular view is that Makhura should be confirmed as the chair," Masingi said.

The Johannesburg region, which also held its conference at the weekend, is backing its former regional chairman Tau for the position of provincial deputy chair.

By yesterday morning, the conference was still stuck on who was eligible to attend. It got off late in the afternoon yesterday following a meeting between regional task team and provincial deployees including Mpho Nawa.

Sedibeng is divided between those who want Hope Papo to retain his position as provincial secretary and those backing Emfuleni mayor Jacob Khawe.

Regional spokesman Themba Ndaba said that the conference was hot issue because its outcome would influence the provincial leadership. "Some delegates feel that illegitimate branches were attending the conference," he said.

Nawa said the conference was delayed because of "procedural issues".

"It went through after there was agreement," Nawa said.

Political analyst Ralph Mathekga said the power dynamics playing out at regional level would likely also affect the provincial conference. "Gauteng used to be the least divided province. It is clear that people want to contest the conference," he said.