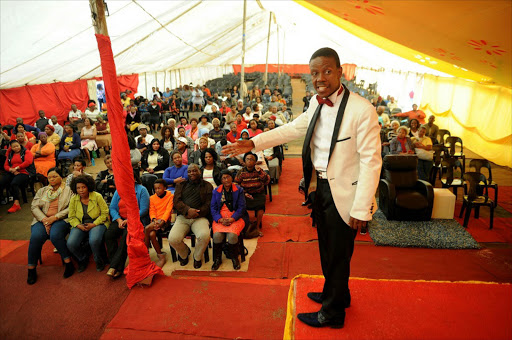 Four police officers and their commander stood before the altar of the Incredible Happenings Ministries in Katlehong on Sunday to receive blessings from Pastor Paseka Motsoeneng‚ famously known as Prophet Mboro‚ for their heroism.

The five‚ together with the mother of the three-year-old‚ received blessings from Mboro and his congregation.

Mboro committed to send certificates and trophies to the Springs police station where they are based during the course of the week for their heroic effort in saving the little girl. The certificates could not be given on Sunday as their names could not be engraved in time on the trophies set to accompany them.

In his sermon‚ Mboro encouraged the officers to do their work and not worry about the pay.

“Everybody calls you but we forget you are human beings. When you are done with everything‚ everybody forgets. You get a small salary. But keep on doing what you are doing‚ God will reward you‚” Mboro told the officers who were dressed in uniform.

The mother of the little girl also received a R2‚000 from Mboro and the prophet committed to buy her two children clothes.

A security guard was walking along Blesbok River in Springs when he spotted a three-year-old girl hanging on for dear life to a grass mound about two metres from the river bank. He called the police but when they arrived they they realised it would too long to bring in a diving unit.

Thobejane‚ who cannot swim‚ took off his clothes and went into the water to save the little girl. With a colleague holding on to one end of his jacket and he clutching the other end‚ he stretched out and grabbed the girl from the grass mound. The little girl was still carrying her shoes with her in the cold water.

Till today no one knows how the little girl ended up in the river and how long she had been in the water. It was about 5pm when the police rescued the girl. Police then sat at a nearby street intersection with the little girl asking everyone passing by if they knew the girl. Eventually they made a breakthrough and managed to locate the mother.

Her mother‚ who is from Payneville in Springs‚ explained the events preceding her daughter’s rescue to the congregation.

“I was visiting my cousin in Springs (Slovo Park) but it was late when I had to leave. She suggested that I leave the child and fetch her the next day. When I came back I found the police at my cousin’s place who told me that they found my daughter in the river. My cousin told me that my daughter was playing with her child in the yard and the next thing she did not know where she was‚” the shy mother told the congregation.

Mthimkulu‚ who will soon retire from the force‚ was touched at being acknowledged by the church for the role he had played in rescuing the little girl.