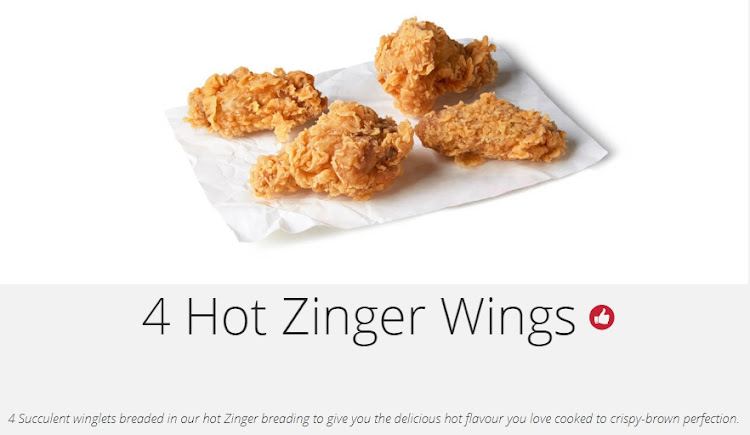 A KFC customer has complained about the size of the fast food restaurant’s chicken wings.

Shaakir Ismail complained to the Advertising Standards Authority (ASA) about a KFC advertisement on its website promoting its Zinger Wings. It shows a photograph of four chicken pieces and states: “Four Hot Zinger Wings. Four Succulent winglets breaded in our hot Zinger breading to give you the delicious hot flavour you love cooked to crispy-brown perfection.”

Ismail said it should be advertised as “Two Zinger Wings”‚ because the photograph shows two chicken wings cut into four pieces.

KFC said it would not change the advertisement‚ because it consists of four wing pieces made from two full chicken wings. The fast food restaurant told the ASA it is the industry norm to advertise “individual wing pieces as wings” and referred to Chicken Licken’s Hot Wings‚ Hungry Lion’s Zamba Wings‚ Spur’s Buffalo wings and Burger King’s Chicken Wings.

The ASA referred to a similar complaint against KFC in 2006. It ruled at the time: “Although the advertising states ‘HOT & SPICY WINGS’‚ it has been established that [the] Department of Health does not have a definition [of] a ‘wing’.”

In their latest ruling‚ the ASA said it is clear KFC is selling half wings as the description below the photograph states.

“The hypothetical reasonable person viewing the advertisement would not be misled into thinking that he/she is getting full wings when the illustration and the descriptor all point to the fact that it is half wings.”

The ASA dismissed the complaint on Wednesday.

Soap commercial not so squeaky clean