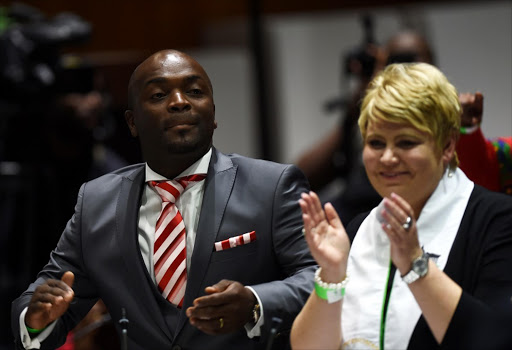 Axed former chief of staff in the City of Tshwane Marietha Aucamp has been found to have unduly benefitted from millions after lying about her qualifications.

This was revealed yesterday in damning findings made by an independent audit chief in the city which found - among other things - that Aucamp had filled in an indemnity form stating that she held a B-Tech qualification.

"The chief of staff has been found to have misrepresented her qualifications by stating that she has a B-Tech degree on a competency assessment form that she submitted," said city manager Moeketsi Mosola.

"The appointment of the chief of staff in acting capacity and on contract was irregular and was not in line with the job requirements and our human resources policies," he said.

An inquiry into the “just a matric” scandal affecting the City of Tshwane has exonerated mayor Solly Msimanga from any impropriety but found that his ...
News
3 years ago

The first phase of the investigation also found that three human resources officials had covered up the fact that Aucamp lied about her qualifications.

Mosola said they were in possession of evidence which reveals that the human resources officials didn't apply proper procedures and policies, which eventually landed Aucamp the top job costing taxpayers R1.2-million a year.

Aucamp, who stated in her Curriculum Vitae that her highest qualification is a matric certificate which she obtained in 1995, is yet to know whether legal action will be taken against her by the city.

City spokesman Selby Bokaba told Sowetan the legal team of the city was tasked with taking the next step.

"All the legal issues have been referred to the legal department because there's quite a number of issues that they will have to advice on.

"The auditor recommended a few things but we don't want to simply act on the basis of a recommendation without having satisfied ourselves that the action will be legal," he said.

Bokaba said phase two of the investigation would scrutinise other senior managers' qualifications in three political offices - namely in the office of the speaker, mayor and the chief whip's.

The Congress of the People (COPE) has laid a charge of fraud against former Tshwane chief of staff Marietta Aucamp for allegedly misrepresenting her ...
News
3 years ago

Aucamp, a DA member, started acting in September 2016, a month after the party took over the metro from the ANC in a bruising local government election, but was appointed permanently in November.

EFF Tshwane chairman Benjamin Disoloane, who initially advocated for Aucamp to be removed in May, said they wanted to be afforded an opportunity to study the report and thereafter determine a way forward.

Attempts to get hold of the ANC drew a blank at the time of going to print.