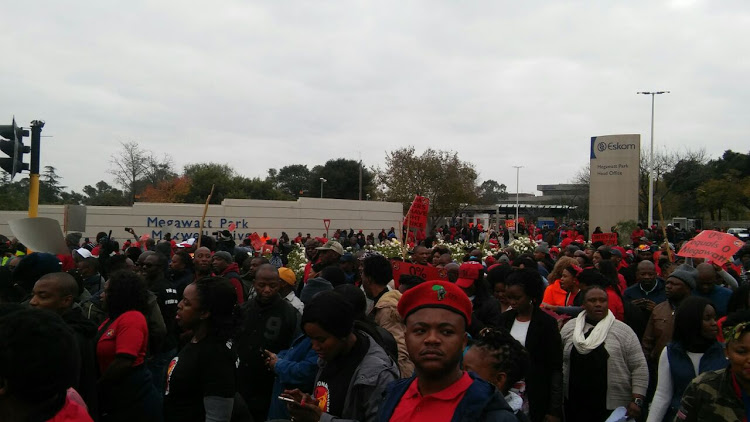 As cash-strapped Eskom heads back to the negotiating table with its trade unions over proposed salary increases on Thursday‚ the unions have controversially asserted their wage proposal will cost the electricity provider less than the stated cost of their recent industrial action.

Here is their statement‚ in full:

Last week the unions jointly made a comprehensive proposal to Eskom management and we were expecting a response to our proposal. Our proposal included a plan for how Eskom can reduce cost drivers‚ whilst also generating enough money for wage increases and guaranteeing the long term sustainability of the State Owned Enterprise.

The proposal included wage demands of the following:

Eskom responded to our proposal today with the following:

• Inflation plus 0.7% for the third year

We have rejected this proposal. This is not an offer we can take back to our members for consideration.

Once again we have called on Eskom to take this process seriously. When you consider the individual demands of the unions since these talks started‚ we have made major concessions and compromised on our positions.

The leadership of all unions have demonstrated commitment by ensuring they are available for engagement. In comparison Eskom has wasted a lot of time and they have not yet made any serious proposal which our members would accept. The Eskom board and the Group CEO Phakamani Hadebe continue to snub the process‚ and they have not bothered to attend any of the talks.

Eskom claims that the industrial action which workers participated in two weeks ago cost the power utility R50-billion rand in damages. Our wage proposal in comparison will cost them only R1.2-billion. Surely if Eskom was determined to settle the strike they would simply accept the proposal which has been made by all unions so that we can resolve the dispute.

Instead they have once again requested more time to consult with their principals. In the spirit of trying to resolve the impasse‚ we have given them time to consult. We shall reconvene on Thursday morning‚ and hopefully this time‚ they will place something meaningful on the table. We are eager to see this process resolved as soon as possible.