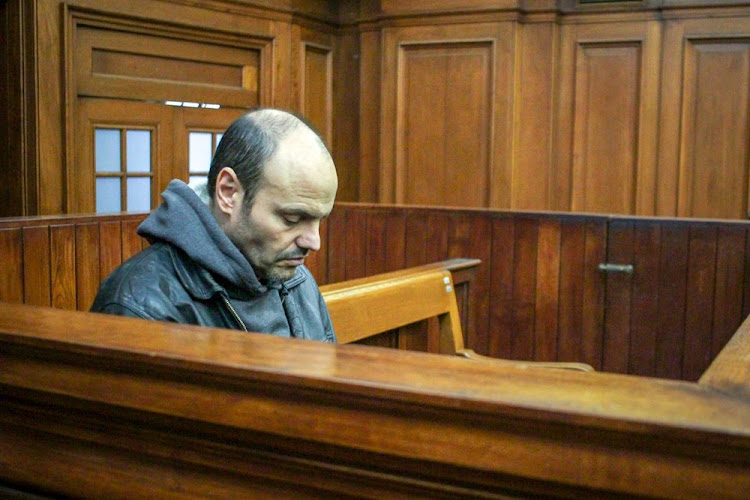 Diego Novella in the dock at the high court in Cape Town on Thursday.
Image: Anthony Molyneaux

Kabrins cried while Saldanha read evidence from a postmortem report describing debilitating injuries Alban sustained during a brutal assault which could have lasted several minutes and even hours.

Novella‚ the 44-year-old beneficiary of a cement empire in Guatemala which is owned by his deceased mother's family‚ allegedly murdered Alban after ingesting various substances‚ including cannabis and sceletium‚ which is derived from an indigenous plant.

The 120-day murder trial of American-born Gabriela Kabrins Alban came to an end on Thursday (June 28) after Judge Vincent Saldanha read out his verdict in the Cape Town High Court.

He and Alban stayed in the Camps Bay Retreat boutique hotel during a visit to South Africa‚ and although he pleaded not guilty to murder he testified that he killed Alban‚ perceiving her at the time to be a demonic entity.

He claimed that his mind was “hijacked” and that after he had a physical altercation with the demon he went to the beach and waded into the sea. He said that he thought everyone on the beach was looking at him and that the sun was black and pulsating.

The forensic report described the scene where Albans' body was found as being carefully orchestrated‚ with chips and sweets covering her body. Chocolates were stuffed into her battered mouth. A hair-dryer was placed between her thighs. A shirt bearing the word "Ubuntu" was placed neatly on her chest.

Novella also defecated on Albans’ head and feet and wrote the Spanish word “sorote”‚ meaning “piece of sh*t”‚ on a piece of paper which he placed on her forehead.

He said that he was in a state of psychopathy as a result of his intoxication. The state‚ however‚ argued that he acted out of anger after Alban called him an “idiot” and a “faggot”.

Diego Novella‚ accused of murdering his girlfriend Gabriella Alban at a hotel in Camps Bay‚ dropped a bombshell in the High Court in Cape Town on ...
News
4 years ago
Next Article