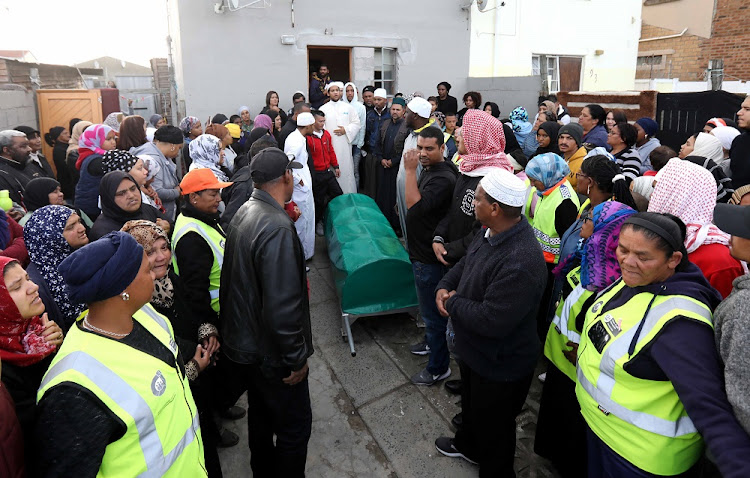 Stacey 's body was found opposite her grandmother's house in a shallow grave next to a Wendy house.
Image: ESA ALEXANDER/SUNDAY TIMES

The man accused of murdering six-year-old Stacey Adams made his first court appearance on Wednesday.

The 26-year-old scoffed at photographers snapping pictures of his face after the full gallery in the Mitchells Plain Magistrate's Court heard that he had a pending murder case and three assault cases‚ including one with intent to cause grievous bodily harm.

The suspect was arrested on Sunday after a community search party found Stacey's body in a tiny shallow grave right behind the Wendy house where he lived. She had been reported missing on Saturday. The grave was in full view of the porch of the Adams family home.

The community reacted to the find by petrol-bombing the suspect's family home.

Police used rubber bullets to disperse residents and escorted the suspect away in an armoured Nyala. Stacey's cousin Lial Daniels said the family and the community were arranging petitions to oppose bail.

"If justice is not going to be served at the court‚ we as the community and the family are going to stand up and we will take justice into our own hands‚" he said.

The family knew the suspect since he was a child and Daniels said they grew up together. He said that they would greet each other if their paths crossed but that they were never friends.

Members of various community organisations attended the proceedings‚ including the Mitchells Plain Crisis Forum‚ an organisation that was formed after the rape and murder of Courtney Peters from Elsiesriver last year. The suspect is charged with rape and murder in this case. The case was postponed to July 24.

IN PICTURES: Heartbreak and devastation as 6-year-old Stacey Adams is laid to rest

The murder of six-year-old Stacey Adams has sent shockwaves through the community of Mitchells Plain‚ Cape Town‚ and across the country.
News
3 years ago
Next Article