Police won't be cowed by taxis 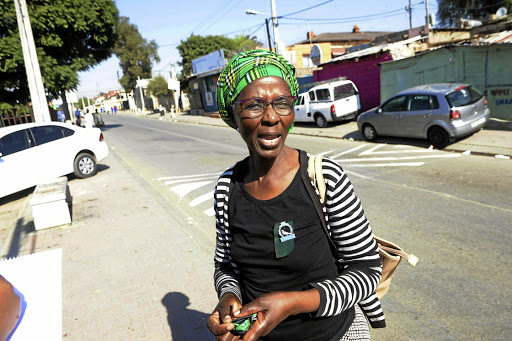 Elda Makgalo found the taxi rank empty as she was rushing to her work place in Sandton. /Veli Nhlapo

Elda Makgalo rushed to the Alexandra taxi rank yesterday morning stressed that she was late for work only to be greeted by an empty taxi rank.

Makgalo, 57, who works in Sandton, was one of thousands of commuters around Johannesburg who were left stranded when taxi drivers from 11 associations downed tools yesterday.

The strike came in the wake of the Johannesburg Metropolitan Police Department (JMPD) impounding more than 500 minibus taxis during Operation Buya Mthetho, which started in February.

"I could not understand what was happening and I waited there for 20 minutes with no luck. I heard about the strike from others and there were not enough buses to transport us all," Makgalo said.

Another commuter, Bradley Tsoka, 32, who works for an insurance company in Pretoria said he was worried about not going to work as this would affect his production.

Lizelle Lottering, 32, who works at the local mall, said she was the only one at work and decided to go back home when her colleagues who reside in Soweto sent her messages saying there were no taxis.

Jabulani Ntshanga, the spokesman for Alexandra Taxi Association said the metro police have a problem with taxi drivers.

"When the taxi driver has committed an offence, metro police don't issue tickets instead they take out the disc and the following week impound the taxi.

"We are also complaining about e-toll tickets, whereas there is a lack of road maintenance. There is also a problem with petrol price hikes without a subsidy which is too much, as we have drivers to pay and families to take care of," Ntshanga said.

Member of the mayoral committee for public safety councillor Michael Sun said the JMPD would not be bullied by taxi associations to condone lawlessness.

"We will not surrender to lawlessness, illegal, non-compliant and irresponsible operators cannot expect us to look away while they play with the lives of commuters and other motorists on the road.

"We will certainly not be bullied into submission by individuals who promote lawless conduct. We invite the operators affected to engage with us in a mature and professional manner. It is in the interest of everyone that we find a sustainable solution," Sun said.

He said the JMPD had been removing unroadworthy, unlicensed and illegal vehicles from the road across the city and will continue to do so.

"JMPD is on high alert and have been deployed to the identified hotspots," Sun said.