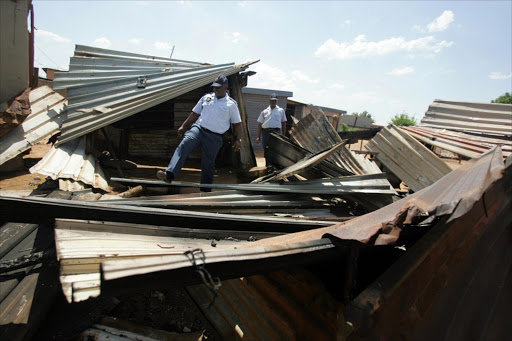 Community leader Lindeka Tshomela explained that most of the occupiers were backyarders who struggled to pay rent for their backyard dwellings before they began moving onto the land two weeks ago.

Nomapha Gwele said she was busy feeding her baby at her cousin’s place nearby when the officials destroyed her shack and confiscated her building materials.

“I feel like screaming aloud‚” said Gwele as she wiped tears from her eyes. “The officials don’t seem to understand how much I want a place to stay and how much I struggle to survive.” She works on a part-time basis as a domestic worker in Lansdowne.

Tshomela said the law enforcement officials were unnecessarily aggressive. “In one instance the officials shoved a mother of a little baby out of her shack while she cooked for her family‚” she said.

Abongile Sotobe said he had spent four days clearing bushes from the spot where he erected his shack. “The officials found me fixing a mat onto the floor of my shack and ordered me to stand aside. They then destroyed it and seized my building materials‚” he said.

Sotobe said he used to stay with his parents in Enkanini informal settlement before he made a decision to occupy the land. “I can’t stay at home forever. I want to have a place of my own now‚” he said.

“The land is currently being occupied illegally‚” said Luthando Tyhalibongo‚ media manager for the City of Cape Town. “The City is removing unoccupied and incomplete structures which have been illegally erected.”

Officials don’t understand how much I struggle to survive, says land...

But Msindisi Mnyamana said he had occupied his shack for two days before it was demolished on Monday. “They stormed into my shack and marched me out before they tore it down without even bothering to move my belongings out first‚” he said. Mnyamana said he had a bed‚ cupboard and clothes inside his shack.

“It took me the whole day to fell trees and remove bushes from the spot where my shack stood‚ but my efforts meant nothing to the officials as they destroyed it with crowbars‚” he said.

Some people moved onto the land shortly after the officials left.

* This article was originally published by Groundup.