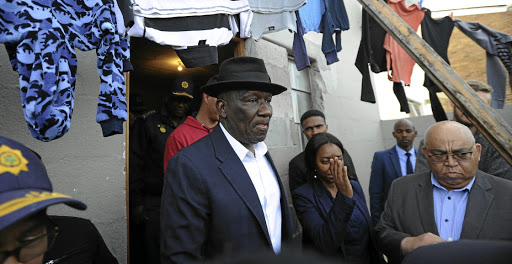 Police Minister Bheki Cele received a hostile reception in Cape Town yesterday when he visited the family of a murdered six-year-old girl.

A large crowd of angry residents shouted insults at the minister and called for the police to hand over the 26-year-old neighbour arrested on Sunday in connection with Stacey Adams's death.

Stacey disappeared on Saturday and her body was found on Sunday in a shallow grave near her family home in Eastridge, Mitchells Plain.

Standing on the doorstep of the Adams house, Cele said what had happened was heartbreaking. But residents and members of a community activist group Gatvol Capetonian told him to "voetsek".

A large contingent of police officers stood by as Cele's motorcade left the area with people booing and jeering. Reinforcements soon arrived to prevent a recurrence of Sunday's violence, when police had to load the suspect into an armoured vehicle and disperse angry neighbours with rubber bullets.

Gatvol community leaders Fadil Adams and Oscar Lyons called on residents to go to court for the suspect's appearance today to demand the man's release.

"This is what we say to government: 'You put two Wendy huts in a backyard of a house, you put the unemployment there, you put the overcrowding there, you throw in drugs. That was a time bomb. Someone was going to get killed, unfortunately she was six years old."

Stacey's great aunt Naeemah Londt said although she was grateful for Cele's visit, it meant nothing. "What would be better is if we as the community could take the law into our own hands. That's all," she said.

"The police should have just left us so we could do our thing, hurt him. He has to feel how that girl felt. I have four daughters ..." she said.

Cele said he had been told Stacey was bubbly and loved joking and dancing.

Ten metres away, crime scene tape flapped in the wind around the yard where Stacey's body was found buried next to the suspect's Wendy house.

The suspect's family home was gutted by fire after residents petrol-bombed it on Sunday.