NUM slants towards links with Numsa 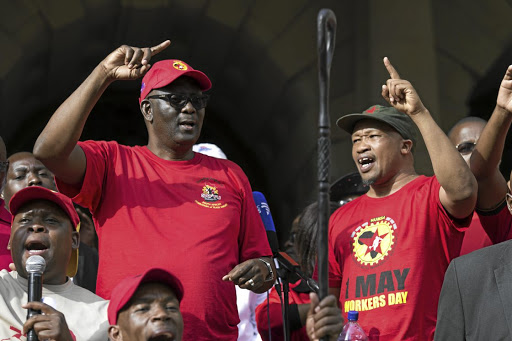 Reacting to the news that Sipunzi's faction had won, Numsa general-secretary Irvin Jim said the developments opens up the possibility of a merger between NUM and his union. Numsa was expelled from Cosatu for "stealing members" from the NUM and for refusing to campaign for the ANC ahead of the 2014 general elections.

Matosa was among the NUM leaders who backed Numsa's expulsion. Sipunzi was said to be among those who advised against it. He was also seen as sympathetic to then Cosatu general secretary Zwelinzima Vavi who later joined forces with Numsa to form a new trade union federation.

NUM in dire straits after R37m splurge on golf shirts

"The previous NUM leadership which was close to the ANC leadership led a charge of expelling Numsa. Cosatu was acting politically when it dismissed Numsa. Our responsibility as the leadership is to try to unite workers than to divide them," Jim said yesterday.

Although rivals, NUM and Numsa have worked closely in recent weeks fighting Eskom over the power utility's refusal to hike wages.

NUM spokesman Livhuwani Mammburu would not entertain talks of a merger yesterday but believes Numsa should be brought back to Cosatu.

"Our general secretary has said that Numsa must come back to Casatu," he said.

Divisions have plagued NUM since Sipunzi replaced Frans Baleni as general secretary in 2015.

The National Union of Mineworkers (NUM) has blamed the Marikana massacre for its decline in membership.
News
3 years ago

"We will make this country ungovernable if the ANC-led government does not abandon the IPP (independent power producers) policy," he said.

Montisetsi said the NUM national congress has resolved to work with the SACP.

"I am going to craft recruitment and national political schools campaigns to grow the NUM. We are going to launch an integrated independent development together with the SACP," he said.