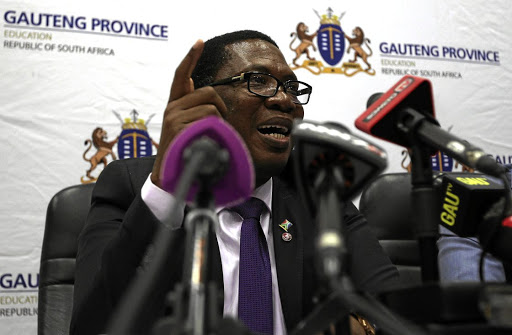 Gauteng MEC for Education Panyaza Lesufi says though schools have become unsafe he is reluctant to “militarise” them.

Lesufi was speaking to show host Eusebius McKaiser on Radio 702 on Monday.

“Children need to be children‚ they need to be free. If I have money and I have to choose between hiring someone with a knobkerrie and a teacher‚ I would choose a teacher.

“Let it be law enforcement agencies that bring education at the centre of their security analysis and security and risk. We have a mandate to ensure that our children are free from harm and intimidation‚” Lesufi said.

Lesufi was weighing in on the issue of alleged widespread sexual harassment and violence in schools.

Gauteng MEC of education Panyaza Lesufi expressed the need for the establishment of a new code of conduct during his visit to the Parktown Boys’ High ...
News
4 years ago

“What makes it worse is when educators who are supposed to provide that comfort and guide and protect are at the centre of that particular violence. I will pick the recent example which is Parktown Boys: If you have six educators that believe they can freely sexually harass our children‚ they can freely hurl insults at our children and as they wish‚ that on its own summarises the problems that we are facing in education space‚” Lesufi said.

He said that the opposite was true as well as the province was faced with a situation where it had already expelled 48 pupils in the first quarter due to violence against educators.

“[To have learners who] have behaved in a manner that you least expect - bringing weapons‚ alcohol and drugs within the school premises. That on its own demonstrates the point that we are driving that we are part of this society. But most importantly‚ schools used to be a haven for safety‚ for goodness. That is why I’m very reluctant to militarise our schools‚” said Lesufi.

Amid claims of rampant sexual abuse‚ it has emerged that the South African Council of Educators (SACE) has not been able to check the names of potential teachers who might be sex pests against the National Register for Sex Offenders or the Child Protection Register.