We didn’t discuss nuclear or political assassinations: David Mabuza on visit to Russia 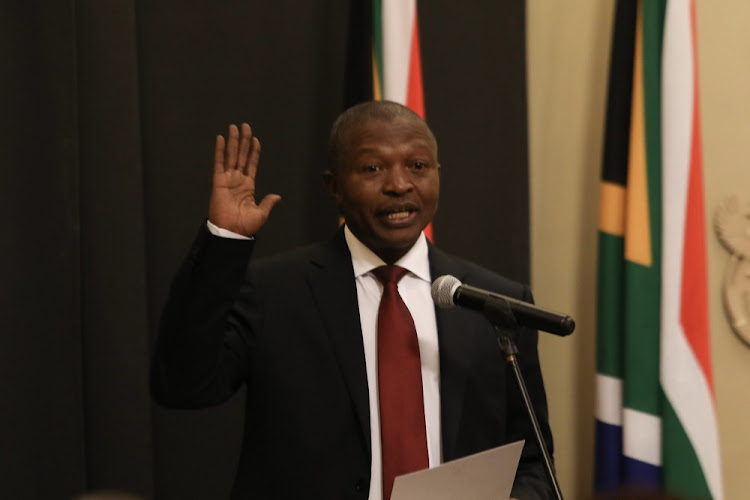 Deputy President David “DD” Mabuza wouldn't be drawn on Thursday into answering whether he discussed South Africa's upcoming elections with the Russians when he visited their country last month‚ but he was clear that nuclear was not on the agenda.

Mabuza was answering MPs oral questions in the National Council of Provinces on Thursday afternoon. He told MPs that he went to Russia at President Cyril Ramaphosa's request to convey South Africa's message of congratulations to Russian President Vladimir Putin on his re-election and inauguration which Ramaphosa could not attend.

Mabuza said he never met with the Russian president but had a meeting with that country's foreign affairs minister‚ who was assigned by the president for the meeting.

“In our discussions we renewed South Africa's commitment to further develop the good relationship we have with Russia guided by the 2013 joint declaration on strategic partnership. We further discussed the importance of the implementation of the provision of the declaration‚ especially pertaining to annual political consultation by foreign ministers and consultations at presidential level”.

The race to succeed David Mabuza is getting dirty as party members carried guns to a regional conference.
News
4 years ago

“In those engagements‚ we expressed South Africa's appreciation that Russia accepted the proposed dates to host the SA-Russia 15th high-tech session in Moscow.

“The high-tech session is a technical session where bureaucrats meet to prepare for a Brics summit‚ he explained. “I went there with the proposal that this high-tech must sit on this date‚ and they accepted the programme. As we are speaking‚ that session has taken place already‚” he said.

He explained that through that forum‚ the two countries had fostered economic relations and strengthened their strategic relationship. They had also discussed the state of South Africa's readiness to host the 10th Brics summit of heads of state in Johannesburg next month.

The two leaders also discussed UN reforms where South Africa had enlisted Russia's support for South Africa’s candidature of the non-permanent seat in the UN Security Council. South Africa clinched that seat with an overwhelming vote earlier this month with Russia among its backers.

“In all the issues I've referred to above‚ there is no mention of nuclear and no discussion has taken place regarding the so-called nuclear deal which we held‚” said Mabuza. “No reference was made about any current or future agreement [but] having said that‚ our government's position on nuclear remains that it is part of our energy mix to diversify our sources of energy. Our integrated resource plan to be concluded later in the year will determine the role of nuclear in that mix‚” said Mabuza.

He was responding to prepared questions from DA MP Bronwynn Engelbrecht who wanted to know about the discussions with Putin and the Russian government regarding the nuclear deal and whether any current and/or future agreements were made regarding nuclear power.

Engelbrecht followed up with a cheeky question which appeared to have annoyed Mabuza and some ANC MPs: “In light of your discussions with the Russian minister of foreign affairs‚ can you please confirm whether or not you discussed the modus operandi for the conduct of political assassinations in the light of your own history of alleged involvement in political murders and in the Russian government's alleged history of conducting political assassinations?”

This question led to a bit of a stand-off between Engelbrecht and Jomo Nyambi‚ who was presiding over the session. Nyami described it as “offensive‚ unbecoming and against the rules”‚ but in the end he decided that it was up to Mabuza to answer it.

Mabuza chose to address the matter. “Firstly‚ we have not discussed any political assassinations‚ that was not on the agenda. I've listed all the things we discussed.”

He made the standard call on this matter‚ that people who have information about political killings should report them to law enforcement agencies rather than repeating allegations in the house.

Another DA MP‚ Beyers Smit‚ wanted to know whether Mabuza had discussed with the Russians “the modus operandi for the conduct of rigging elections ahead of this country's upcoming elections in the light of the Russian government's alleged involvement in rigging elections in both their own country and in other democracies. This is where Mabuza drew the line‚ saying he would no longer answer new questions that were not relevant to the original question.