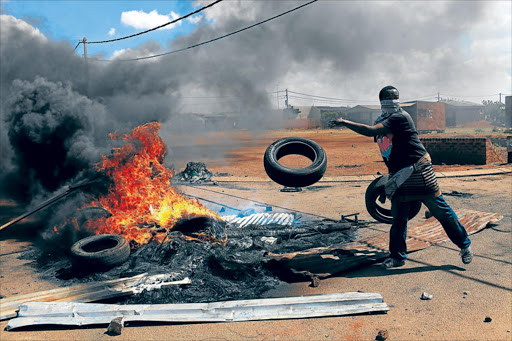 Motorists should be careful of of protests during the holidays.
Image: Alon Skuy

A spate of protests disrupting traffic has added to the obstacles faced by motorists and commuters who plan to travel by road over the winter school holidays.

Automobile Association of South Africa spokesman Layton Beard urged drivers travelling over the holidays to be cautious. "The traditional busy routes‚ the N3 to Durban‚ the N2 to Port Elizabeth from Cape Town … all those traditional routes we expect will be busy starting tomorrow and going into the weekend‚" said Beard.

National Taxi Alliance spokesman Theo Malele said there were a number of transport corridors that were expected to experience “high volumes of traffic‚ depending on the economic status of some people”.

“We will have the Mpumalanga corridor with people making their way to the [Kruger National] game park. You will get a slight pick up on the N3 towards Durban and also along the N1 to Bloemfontein and Cape Town and to the Eastern Cape.”

He said any routes affected by congestion would also have an impact on public transport. “We will experience a bit of pressure but our guys always have a way of absorbing the pressure‚" he added.

An added concern to the usual congestion and road works on some routes will be how service delivery protests have played out in recent weeks.

Traffic was brought to a standstill as a service delivery protest unfolded along the N2 freeway near King Williams Town early on Thursday.

The N2 highway – a national artery from Cape Town to Port Elizabeth‚ East London‚ Durban and onto Ermelo – was shut down on Wednesday near George on the Garden Route in the Southern Cape. Thembalethu residents took to the streets. Three trucks were petrol bombed and concrete blocks littered the road‚ forcing authorities to close the N2 for several hours.

Southern Cape Police spokesman Captain Malcom Pojie said on Thursday that the N2 had been re-opened but would be monitored by police. He said 24 people were arrested on charges of public violence.

George Municipality spokesman Chantel Edwards-Klose said that a section of the N2 had been closed for 24 hours but traffic had been diverted through the CBD.

There were no immediate reports of tourism being adversely affected.

Lizanne Deyzel‚ from Loerie Guesthouse in George‚ said they were fully booked for the weekend. “There are alternative routes to get to George and I am sure there will be traffic officers guiding the people‚" she added.

There were significant disruptions when trucks blocked the N3 – a busy corridor linking Gauteng and KwaZulu-Natal - at Van Reenen’s Pass in a protest on Wednesday. The highway was blocked in both directions between Harrismith and Ladysmith. On Thursday‚ KwaZulu-Natal police spokesperson‚ Colonel Thembeka Mbhele‚ said 62 people had been arrested for public violence and obstructing traffic.

And on Monday the R59 near Meyerton in Gauteng was closed after scores of people went on the rampage‚ blocking the road and hurling stones at passing vehicles.

"What we would suggest to people is to keep an ear on radio bulletins and watch TV bulletins and read newspapers but also very importantly‚ monitor social media for any news on disruptions on specific routes to get an idea that‚ if there is a problem on a road‚ you are aware of it‚" said Beard.

“Always have an alternative route in mind. Look around your area and try to have a different route to your destination. If you are going to drive and there is a situation on the road you must be able to read and avoid that area. Read your environment‚" said Botha.

He said motorists should observe‚ decide and act. "Change your lanes when you drive under a bridge …. You can drive with your car‚ even if you have a flat tyre and you are not sure about the environment‚ you can still drive with the three wheels and a flat tyre to a place of safety‚" he said.

He said motorists should plan their trips around areas known for protests. "Avoid the hot spots in your area‚ even though it may not be active when you drive but there is still a possibility that chaos can break out any moment. Avoid an area that can become volatile in seconds."

Botha urged motorists to have a small bag in their vehicles with important items‚ such as water‚ a torch‚ small energy bar‚ a pocket knife and small amount of cash.

"If you need to abandon your car‚ leave the car‚ it can be replaced. If you stay in your vehicle you might become a target and get hurt."