SACP says Lekganyane is not fit to lead the ANC 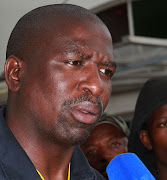 The SACP is up in arms against its former Limpopo leader Soviet Lekganyane contesting for the position of ANC provincial secretary this weekend.

Lekganyane will slug it out with former ANC Youth League provincial chairman and current deputy speaker of the legislature, Lehlogonolo Masoga, at the conference taking place in Polokwane.

"As a principle, any person . who might have historically led the movement into disrepute, who through their conduct. might have deceived the people, derailed the revolution and in the process delayed the liberation of the people, should not be trusted with higher office like the one of the provincial secretary," Thobejane said. He said it was common knowledge that three things had happened under Lekganyane's tenure as leader of both the SACP and ANC in the past.

"While he was secretary of the SACP, Lekganyane led the process of imploding and liquidating the party in the province. It was also under his nose when factions cemented themselves when he was provincial secretary of the ANC." Lekganyane was expelled from the SACP.

Thobejane said it was under Lekganyane's leadership during former premier Cassel Mathale's administration that the province was plunged into debt of more than R2-billion.

He said they were aware the ANC may push for Lekganyane's election but that would be a sad day for the party.

"All delegates at the conference must think at the level of sanity and putting the ANC and the people first," he said.

Lekganyane said yesterday that he didn't nominate himself for any position.

"We must respect the wishes of the branches, and . enhance the unity of the alliance in whatever we do and say."