NUM in dire straits after R37m splurge on golf shirts 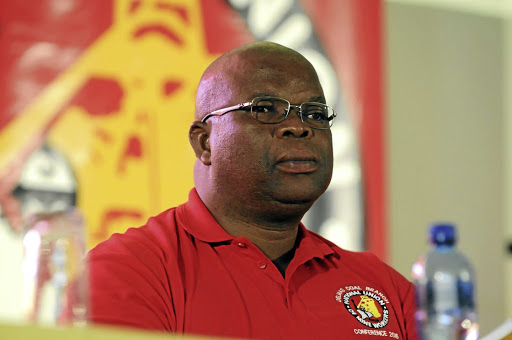 Delegates at the National Union of Mineworkers' (NUM) national congress in Boksburg were yesterday told that the 185287-strong labour organisation is in financial distress and would have to do some belt-tightening to survive.

NUM general secretary David Sipunzi partly blamed the union's money woes on a 2015 congress resolution to buy "quality golf shirts" for all members once a year.

According to NUM insiders, the merchandise was procured from NUM's sister Cosatu affiliate - the SA Clothing and Textile Union (Sactwu) - at about R200 a shirt. The T-shirts, which were to be distributed to over 1000 branches across the country, came in red, white and black colours.

If all of the union's members received their T-shirts, it is estimated that the union would have spent over R37-million.

It was not clear yesterday why the union decided to "spoil" its members with fancy and "free" golf shirts, but the resolution was taken at a time when NUM was bleeding members to rival mining sector union, Joseph Mathunjwa's Association of Mineworkers and Construction Union (Amcu).

Sipunzi told delegates yesterday that the union's deficit had ballooned from R5.8-million in 2012 to about R27-million.

He said the golf shirts resolution had contributed to there being a hole in the union's budget. "We need to find a sustainable way of financing the resolution on golf T-shirts so as not to keep on tapping on the reserves. We had to tap into the reserves and withdraw R40-million in order to pay the creditors.

"That was a result of spending far more than our income in terms of subscriptions. We learn by mistakes; if you don't make mistakes, you will never learn."

In a written report to the congress, the union said the exercise of distributing the shirts "helped us clean our membership system because we could identify branches that are paying and those that are not paying".

The union, once Cosatu's biggest and most influential, has seen its membership plunge from over 400000 in the late 1990s to just under 200000 this year due to retrenchments, competition from rival unions as well as dissatisfaction among members with the quality of service it provides.

In the past it played a major political role with two of its former general secretaries, Cyril Ramaphosa and Kgalema Motlanthe, rising to become SA presidents.

This week's congress is expected to debate whether to endorse the SACP's resolution to contest elections independently from the ANC.