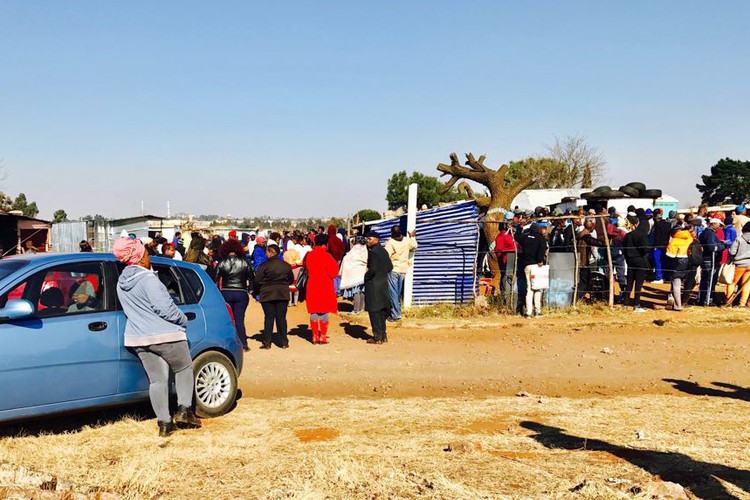 People queue with their ID documents to be registered by members of the EFF for a piece of land in Brakpan.
Image: GroupUp / Kimberly Mutandiro

Ntombifuthi Masina waits in anticipation‚ holding a shovel in her right arm. She listens attentively for her name to be called by the land allocators. She knew the land was being occupied unlawfully‚ but she wants a share of land to build a shack to live with her five children.

She registered her name to be given a piece of land at the old Brakpan township location to the EFF members in charge of the initiative. Finally she is hoping to get her own place after having waited for the housing department for years in vain.

Masina currently lives in a two-bedroom family house in Tsakane’s Extension 17. She and her five children share the house with her brother and his family. They are always fighting. There is no peace in the house‚ she says.

“This is the land of our ancestors. Our forefathers were removed from here over forty years ago. I’m only glad to be given land here‚” says Masina pointing towards old foundations around the area where houses were apparently removed under apartheid.

She is one of hundreds of people who have been frequenting a piece of land at the old Brakpan location during the past two weeks. They heard that the piece of land was being “taken back”.

But the land does not belong to the allocators. It belongs to the municipality‚ which is opposed to people being given land unlawfully. Nevertheless‚ desperate people have been slowly building shacks here since the beginning of 2017‚ coming from as far as Germiston‚ Kahlehong‚ Duduza‚ Benoni‚ Tsakane‚ Brakpan‚ Springs and Kwathema.

Despite several attempts by Metro Police and “red ants” to stop the occupation‚ which neighbours an area with upmarket houses‚ the occupations have continued.

The registration and allocation process has been getting busier as word has spread.

Makgabo Malope‚ a widow from an informal settlement in Tsakane Extension 10‚ says she came running as soon as she heard that people were being allocated free land here. She rents a one-roomed shack for R150 a month where she lives with her six children. One of her children is disabled.

Malope says she can barely afford the monthly rental as she does not work and relies on her children’s grant money. The housing department in Alberton‚ where she had registered for a house in 2010‚ told her to start again because it could not find an entry under her name.

Malope last worked in 2014 in security. She has been looking for work since then‚ finding nothing.

“lf only l can get a place to stay with my children. I do not even have mealie meal back in my shack and l used my last money for transport to come and get a piece of land‚” she says.

After having been evicted at an informal settlement in Duduza about two years ago‚ Mapule Mnisi is trying her luck once again at the Old Brakpan township location. Mnisi says she borrowed R4‚000 from a loan shark to build the shack which was destroyed by “red ants” in Duduza.

About 50 residents of EbuMnandini‚ an informal settlement in Tshepisong in the west of Johannesburg‚ protested outside Cremona Cheese Factory on ...
News
3 years ago

Although she paid back the money with difficulty‚ she is prepared to borrow more money to build another shack at the new stand she has been allocated. She and her siblings are always fighting at their family house in Duduza. Mnisi has never worked. She wants a place where she can live with her five-year-old child.

“Life has not been easy‚” she says.

Spokesperson for Brakpan Municipality (which falls under the City of Ekurhuleni) Lovemore Chauke said that people had to stop setting up shacks in the area because the municipality had other plans for the piece of land. According to sources at the municipality the intention is to build houses on the occupied land. Not RDP ones‚ but higher-earning households who are able to get bank bonds.

But crowds of people who have already started setting up structures said whatever plans the municipality had would have to meet their housing needs.

Sesi Ndlovu‚ who is the EFF Chairperson for Brakpan ward 97 and also lives at the old Brakpan informal settlement‚ is in charge of allocating people housing stands. Ndlovu says there is no going back. “We have the right to occupy this land because it is the land of our ancestors which was unfairly taken. We are not up for negotiations. We believe in expropriation of land without compensation. If the municipality wants to remove us they will have to kill us first.”

Ndlovu also denied allegations that people were being made to pay between R400 to R1‚600 for the land.

By Friday last week about 2‚500 people had registered for occupation.