Drunk driving traffic cop yet to appear in court 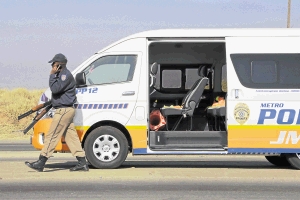 The Joburg Metro Police have apologised to the family after an officer allegedly caused a crash that killed three family members.
Image: CORNELL TUKIRI

A Johannesburg Metro Police Department officer is yet to appear in court after he allegedly caused a crash that killed three family members and injured two others. The accident happened on Sunday night.

The officer has been charged with three counts of culpable homicide and one of drunken driving.

Meanwhile, relatives of the Motloung family who died in the crash are reeling from the shock of losing their loved ones. The crash resulted in the death of 20-year-old Mantombi Motloung, her eight-month-old daughter, Lwandle, as well as Mantombi's sibling, Siphelele. Her father France and another sibling, Mphiliseni, were seriously injured. Mphiliseni is still in ICU.

Family spokeswoman Phindile Qongo said they had still not accepted the tragic loss.

Speaking from their shack in Vlakfontein's Phumla Mqashi informal settlement, Qongo said they were only going to tell France of his daughter's death yesterday.

A Johannesburg Metro police officer has been arrested and suspended from active duty following his involvement in a three car pile-up while using the ...
News
3 years ago

"He has been too weak to receive [the news]. He will be informed by his wife and social workers while he is still in his hospital bed," she said.

The family were travelling from Orange Farm to the settlement when the car driven by the VIP officer crashed into the back of their Toyota Corolla, squashing them with a car in front of them.

Qongo said they were hoping the news would not cause France to deteriorate. "Even though the family is hopeful, we are not certain of his reaction to such news."

The family received food donations from the law enforcement arm.

JMPD spokesman Wayne Minnaar told the family they were sorry that a member of their team had been responsible for the crash. "To the family we are very sorry. It is hurting us that one of our team members was in the accident."

Relative Makwedinana Phama warned of the dangers of drunk driving. "Alcohol is very deadly. We are here because of drinking and driving. What makes it worse is that it was a person charged with upholding the law," Phama said.

The family said the dead will be buried in Nquthu in KwaZulu-Natal.

Earlier this week JMPD boss David Tembe vowed that the officer would not be protected because of his position.