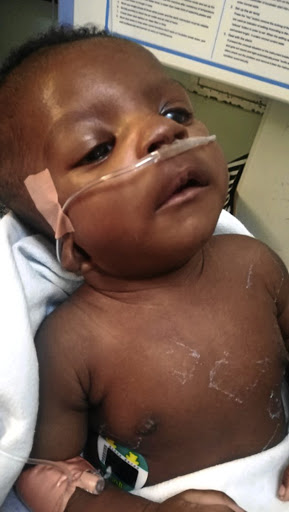 A four-month-old baby boy has stopped breathing in his mother's arms more than 11 times because of a rare syndrome he was born with.

Nathaniel Zengwe was born with a deformed ear that has left him partially deaf, with an underdeveloped respiratory system and an enlarged heart that has shifted to the right side of his body.

"Sometimes I look at him and think he has died," his mother Candice Zengwe said.

"I cry and ask God what did I do to deserve this?

"What did my baby do to deserve this?"

According to the Genetic and Rare Diseases (Gard) Information Centre, Goldenhar Syndrome is a rare congenital disorder in which babies are born with abnormally developed facial features.

This can be accompanied by abnormally developed organs such as the lungs, kidneys and the heart. The syndrome is so rare in South Africa that doctors and geneticists preferred not to comment on baby Nathaniel's case.

Zimbabwean-born Zengwe left her retail job shortly after giving birth because she needed to tend to her son. The 24-year-old first-time mother said she had to depend on herself to look after her baby.

"I can't even put him down. I don't remember when last I had a bath. He sleeps in my arms because when I put him down he starts crying and this causes him to not get enough air," she said.

Nathaniel was transferred from Middelburg Hospital in Mpumalanga to Steve Biko Academic Hospital in Pretoria because of the rarity of his condition.

The young mother said she spent four weeks sleeping on a chair while waiting for news from the doctors on the condition that plagued her son.

"I was feeling so frustrated because I did not know what was happening to my baby. I was confused about his condition because I was being told different stories from different doctors.

"One doctor told me that he might have a heart attack and another said that his heart is fine," said Zengwe.

She said that she is currently renting a draughty garage that brings in cold air and dust that is damaging to his partially developed lungs.

Zengwe said she is grateful for the help she has received from good Samaritans who have donated clothes for Nathaniel but is struggling to survive day-to-day.

"What we really need is specialist care. I want my baby to see someone who knows what they're doing. Someone who will save his life," she said.