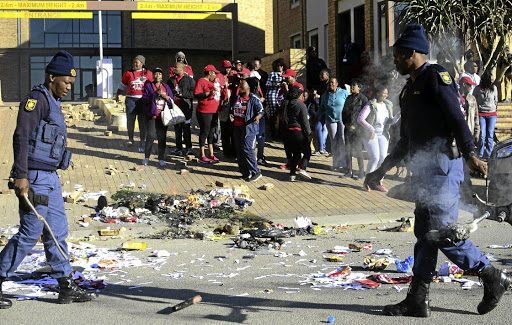 Police clear the road in Mahikeng after angry union members in the department of health blocked it with debris.
Image: Tiro Ramatlhatse

Suspended North West health department head Dr Thabo Lekalakala made a surprise return to work in Mahikeng and didn't take long to get on the wrong side of health workers.

Lekalakala was suspended two months ago pending an investigation into allegations of corruption.

He said his appearance was long overdue.

"The law is clear. It says if I stay at home for more than 60 days I can write to my employer and say because you have not charged me, I am now coming to work. So, I have exercised my rights," he said.

Lekalakala said after realising the department was not getting back to him, he decided to drop in and continue to work as normal.

He said he was absent from work for four months, which he felt was ample time to charge him.

He gave Gupta firm R30m. Why hasn't he been fired?

North West health boss Thabo Lekalakala is still in his job‚ despite a recommendation by the provincial legislature that he be suspended.
News
4 years ago

"I have given them enough time. They failed to prosecute me, so they must allow me to go back to work."

He said he arrived and went straight to his office on Tuesday.

"I could not allow hooligans to dictate to us," he said, referring to disgruntled health workers who had embarked on industrial action. They wanted performance bonuses, among other things.

His comments served to further provoke the workers who were none too pleased by his sudden return to work. They burnt chairs and threw garbage near the entrance to the provincial building to show their disgust.

Workers had been on strike since February 18, and went back to work on May 21 after the ministerial committee task team committed to solve their problems.

Lekalakala said he could not pay them bonuses because of the department's poor performance.

"I declined it based on the fact that the performance was not great," he said.

Nehawu provincial secretary Patrick Makhafane said they were angry because they were not informed of Lekalakala's return. "It's a clear provocation."

Makhafane said the office of the health minister said it would extend Lekalakala's suspension.

"We hope they will do so in order to get stability ."

Ministerial task team spokeswoman Phumla Williams could not be reached for comment.