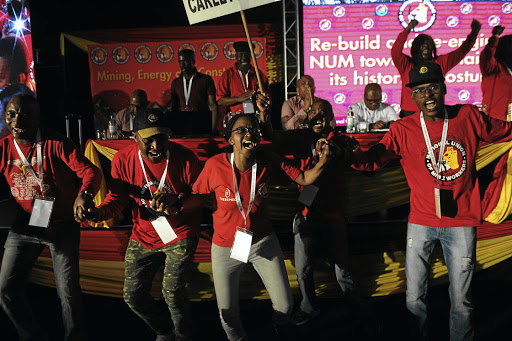 NUM members sing and dance during the elective national congress which is on in Boksburg, Ekurhuleni. /Veli Nhlapo

The National Union of Mineworkers (NUM) has blamed the Marikana massacre for its decline in membership.

Although the massacre happened in 2012, the once powerful union has lost huge membership in the past eight years.

This is contained in the secretariat report which was due to be presented by the union's general secretary David Sipunzi at the elective national congress which kicked off in Boksburg, Ekurhuleni, yesterday.

The report indicates that the union's failure to keep members is also due to internal leadership squabbles that often result in expulsions.

"Intolerance of one by another has become fashionable. The differences are not ideological or about serving union members. They are rather a result of individual egos.

"As leaders focus their energies on trying to annihilate one another, service to members becomes the biggest casualty and members get demoralised. In some instances, members get expelled from the union at the drop of a hat," the secretariat report said.

NUM, which has lost its dominance in the platinum sector, blames the Marikana massacre - where striking mineworkers were killed by police - for loss in membership.

"The year 2012 marked the worst killing season in forcing our members to turn their backs on us. It became worse when workers were led into being massacred by the police.

"This strategy has so far coerced about 70000 of our members to leave NUM involuntarily and join [another] association so that they cannot be killed."

North East region chairman Philip Vilakazi warned that the NUM would cease to exist in the future. "The likelihood is that if retrenchments in the mining and energy sector continue, it will leave us with no option but to close shop. The time people become union members is when they are employed," he said.

The report suggests that the NUM has to adapt to the political and socioeconomic climate changes to avoid suffering the dinosaur's fate.

"History alone cannot help the NUM reclaim the respect it once commanded in society. At the inception, the NUM organised among the most illiterate mineworkers.

"Today's mineworkers are more enlightened and more educated. We must be prepared to invest heavily in our youth if we hope for the future," the report indicates.