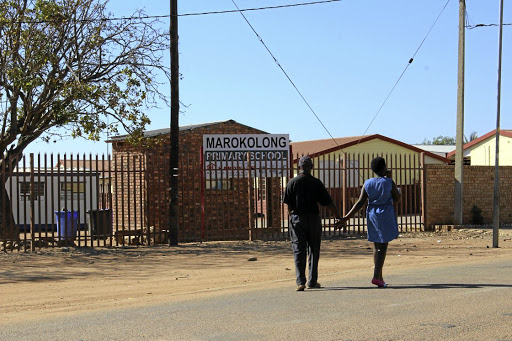 A Grade 7 who got infected from using filthy toilets at Marokolong Primary School in Hammanskraal, north of Pretoria, walks past the school with her father.
Image: ZOE MAHOPO

A 12-year-old pupil who contracted an infection from using filthy toilets at school, resulting in her being hospitalised, says not much has changed since.

Yesteday, the Grade 7 pupil at Marokolong Primary in Hammanskraal relived the horror of feeling maggots crawl on her skin while using a portable toilet at her school.

The problem of maggots allegedly went on for months without intervention last year.

"When I sat on the toilet maggots would crawl all over my buttocks. I sometimes avoided going to the toilet because they were disgusting. Some kids would vomit because of the stench," she said.

According to her medical records, the pupil was hospitalised for four days in March last year after developing abscesses around her genitals.

Now a year later, the girl said the temporary toilets were removed after the community intervened but even the flushing toilets had problems.

The pupil said inside the girl's toilets only one cubicle functioned properly while the others were clogged up.

"All I want is for my school to have proper clean toilets just like the one at home," she said.

In a letter Sowetan saw, the contractor who supplied the portable toilets offered to pay R10000 towards the girl's medical expenses, and R1500 for a cleaner after meetings with the school governing body regarding the toilets' condition and the girl's illness.

But the girl's father said they had not received a cent. The 55-year-old said the girl could need further medical attention and counselling as she still complained of feeling pain and limped when she walks.

"My heart is still broken because of what my child went through," he said.

The father said residents were shocked when they saw the conditions of the portable toilets during a meeting.

"When we got there it was bad. The toilets were broken and filthy. There were maggots everywhere," he said.

Yesterday, Masekela Waste Management Services director Thabo Leshabane said his company was not at fault, adding that he could not maintain the toilets for three weeks because of riots in the area. "We could not send trucks in."

He said the principal returned the money to him as she said she was being threatened. He said he offered to finance medical care for children not because he was accepting guilt. "I just wanted to help."

SGB member Thabo Sathekge said about six more children had fallen sick around the same time as the 12-year-old but the parents were reluctant to speak up.

Sathekge said the school refused to take the R10000 and told the contractor to compensate the parents directly. He said the situation had improved since flushing toilets were installed but agreed four of the 16 cubicles were not working.

Department spokesman Steve Mabona said: "We are satisfied with sanitation at the school after the brick and mortar toilets were renovated in 2017 ."

He said R10000 was sent back to the contractor and the child's parents were aware of this. ". there was no report of any health challenges this year about the learner. However, our officials will visit the family to check ."