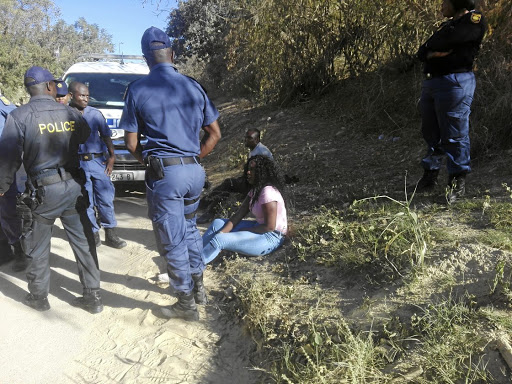 Delegate Fezeka Nkosi was shot and detained by police and denied entry to an ANC Youth League conference. / Mandla Khoza

Some ANC youth league (ANCYL) members in the Ehlanzeni region, Mpumalanga, were injured after police fired rubber bullets at them during their conference on Saturday.

Some members took the conference to court, arguing that they had been replaced by other members because they supported ANCYL treasurer general Reggie Nkabinde to replace Collen Maine, but their urgent court interdict was struck off the roll by Judge Francis Legodi.

The 200 members then decided to camp outside the conference venue at Nutting House in Mbombela and police were called to remove them. This led to a clash with police, leaving seven members hospitalised.

An ANCYL national leader who oversaw the running of the conference, Sizophila Mkhize, said the ANCYL would investigate to find out if indeed those left outside were their members.

"The credentials were adopted and the conference continued smoothly. We heard that there were people who were outside. We were told they are hooligans who burned things there and the police were there to do their job," Mkhize said.

Sowetan understands that the members who were refused entry were replaced by members who would support National Youth Development Agency member Ndumiso Mokako to succeed Maine during the national elective conference in September.

Sphiwe Sibiya, who was part of the league's Regional Task Team (RTT), confirmed that 10 branches were blocked from entering the conference venue. Sibiya, who also was barred from attending, also questioned how the conference reached quorum without these branches.

"We are RTT members of the region and we believe the conference was not supposed to seat but it's funny they locked us out.

"They used police to deal with politics, now our police have shot a lot of people and they are in hospital just on a Youth Day," he said.

Fezeka Nkosi was one of the league members shot by police while singing struggle songs.

"When this conference collapsed on May 26, I was a delegate because audit was done then. Now I'm told that I'm not allowed to participate but I heard that someone has registered in my name and is attending the conference.

"These police were bought to shoot us; you could hear the way they were speaking that they side with the bogus conference leaders. They even went to eat and dine with them after they finished assaulting and shooting us." Nkosi said.

The conference elected Bheki Lubisi as chairman and Siyabonga Malandula as secretary of the region.

Lubisi, who was the convener of the RTT, told Sowetan that those who think they were left out must follow internal processes.

"We have not done anything wrong. People who were supposed to be in the conference were in and they voted."

Mpumalanga police brigadier Leonard Hlathi said they were informed that there was a squabble so the police came.

"A confrontation between ourselves and the group led to the situation we are in," he said.